Stephanie C. says that she has been riding ATVs all her life so it came as a complete shock when the Yamaha Rhino she was riding in suddenly rolled over. The rollover caused serious injuries to Stephanie, her husband and one of her sons. Luckily, all survived the accident.

"We had been riding around that day [April 23, 2007] from 12:00 PM to 8:00 PM and it was around dark when we were coming home," Stephanie says. "We were riding on a dirt road. There was a horse in the weeds that we didn't see and it shot out in front of us. We hit the horse and the Yamaha rolled over and landed on top of me. 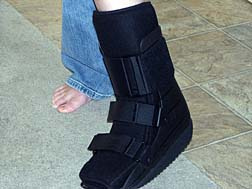 "There were people with us, they got the Rhino off of me. My five-year-old son was not hurt—I must have been protecting him. My seven-year-old had around 30 stitches, busted the back of his head and broke his collarbone. My husband [who was driving the Yamaha Rhino when it rolled over] had a broken hip and pelvic bone.

"The accident broke my leg and ankle. It also broke all the bones in the left side of my face. I had over 100 stitches and still have a plate in my face. I also have a rod in my leg down to the ankle. I was airlifted to a trauma center with my seven-year-old. I was in there for 16 days, he was in for five days.

More News
"I had three surgeries and physical therapy for two months. There is a chunk out of my leg just above the ankle and I almost lost my foot. The chunk that was taken out of the leg kept getting infected. There are a lot of things I can't do now. I can't stand on that leg for long times without it swelling and the plates in my face cause headaches. My husband was off work for four to five weeks after the accident.

"My seven-year-old was knocked out in the rollover, so he doesn't remember it, but my five-year-old remembers. He talks about it a lot.

"I feel like it flipped too easily. We were not going too fast when we hit the horse; we just had a little speed. At the time, there were no doors on the Rhino. Now, it has doors on it.

"All I can say is, if you're going to be on it with your kids, make sure they are buckled with helmets. They [Yamaha Rhinos] flip over easily."