When John rented a Yamaha Rhino for his family to enjoy while on vacation, he had no idea the ride would end with his ten-year-old son being rushed to the hospital when the Rhino rolled over.

Ironically, John originally wanted to take the family four-wheeling but instead rented a Yamaha Rhino as he thought it would be safer. His other son just got out of a cast (for a non-related injury) and his family doctor recommended the Rhino as a safer alternative. All the family was trying to do, said John, was celebrate that his other son was healed. 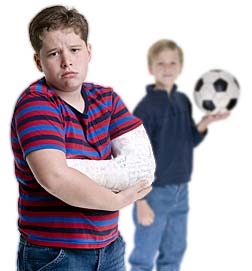 "They were riding it on the hills just out of Grand Junction. My son-in-law who was 21 was driving and came up the hill going about eight-to-ten miles per hour. He came to the top of the hill and needed to turn to get onto the road," said John.

John's son was the only passenger. The Yamaha Rhino turned slowly to the left, and then flipped over on its right side.

The boy's right arm was trapped under the Rhino's roll bar as it slid along his arm. Somehow his left foot also got entangled. His right arm was broken as were the bones in his left foot. The family rushed him to the local hospital where his wounds were cleaned up, and then they headed home.

Once safely at home, the boy was taken to Children's Hospital in Denver, one of almost a dozen visits they would make. He was put in a cast for his right arm, a boot on his left foot and was confined to a wheelchair for almost five weeks.

More News
"You can't use crutches when your arm is broken," said John, "and you can't walk when your foot is broken."

During this time, his son couldn't play basketball or do much of anything."There wasn't a whole lot we could do," said John.

The boy still has a scar measuring about three inches by six inches on his arm. The one bone that broke has healed but the second bone that bent is still bent. Doctors hope it will straighten out over time.

"He won't ride in a golf cart so he won't play golf," said John. "He is terrified of riding in the back of a bus as he feels it will roll over."

The family missed a bit of work time driving the boy to the hospital, as well as some family time. But mostly, they are concerned for their son.