Robert M. does not own a Yamaha Rhino. He does own a Yamaha Grizzly, one that was involved in a rollover accident last year. He has been riding ATVs for over 20 years and says that the Grizzly had too high a center of gravity—a complaint that has also been made about the Yamaha Rhino. In his 20-plus years of riding ATVs, he says he has never had incidents that involved injuries more serious than minor scratches or bruises. However, all that changed after he bought his Yamaha Grizzly 660.

"I have had four or five other ATVs, but this had a much higher center of gravity," Robert (not his real name) says. "It was very unstable." 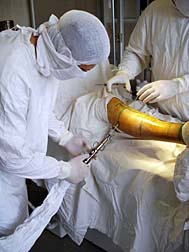 On April 6, 2007, Robert was out for an ATV ride with his friends. He says they were taking turns navigating down a steep hill, but it was a hill they had ridden many, many times in the past, without serious incident. This time, however, he had a problem with the throttle. "We went down the hill one at a time," Robert says. "My wife was with me. As soon as I touched the gas, it went wide open on me. All I could do was jam the brakes. We rolled rear over front. My wife was thrown clear, but the Grizzly landed on top of me. My leg hyperextended 90 degrees, I had three cracked ribs, lost all the ligaments and tendons in my leg, had a sprained wrist and ankle, and cuts to my head."

Robert was hospitalized for four days following the accident and has had two surgeries on his leg. His second surgery, performed January 24, 2008, involved reconstruction of his tendons. The surgeon has told Robert his leg will never be the same. Robert is retired but says he was working a bit on the side, although he is now incapable of doing so. He says he can't do many normal day-to-day things any more.

Robert says he and his friends have spent a lot of time since the rollover analyzing why the throttle stuck wide open, causing the accident. He says no one can figure out why it happened. However, he does have reservations about the Yamaha Grizzly.

"I emphasize that in this particular case, the machine that I have is extremely unstable as far as center of gravity," Robert says. "That's important. I'm not sure if it's intended for trail riding as opposed to work. I don't think it should be used on the trails."

More News
The high center of gravity is one of the major complaints about Yamaha Rhino ATVs. Critics argue that the ATVs weight distribution makes it more likely to rollover, even when it is being operated at low speeds in a reasonably safe manner. A high center of gravity makes vehicles much more unstable. What makes the Rhino accidents even worse is that, until recently, they were not designed with safety equipment even though they had a high risk of rollover accidents.

Lawsuits are now being filed against Yamaha, arguing that even though the Rhino had a high center of gravity, it was not properly equipped with safety gear. They further argue that because of the lack of safety gear, riders in the Yamaha Rhino have been seriously injured and even killed in rollover accidents.