When many people think of ATV accidents, they assume that the person driving the ATV is an inexperienced driver, someone who is not familiar with the ins-and-outs of driving an off-road vehicle. However, when Ryan Foster (not his real name) was involved in a Yamaha Rhino Rollover accident, the married father of one had been driving ATVs his entire life.

"I wish I could tell you that I had been driving 100 miles-per-hour and trying to jump a car," Foster says. "But I wasn't. I was just creeping up a hill." After reaching the top of the hill, Foster was turning the Yamaha Rhino around to come back down when it rolled over.

"It started to tip over and I tried to jump out but I got caught on the roll bar," Foster says. The damage to Foster's left leg was extensive. He suffered a broken ankle, two broken bones in his lower leg and a broken ankle rotator. By the time the doctors were finished surgery, Foster had twelve screws and two plates in his leg and ankle. He was also required to spend five months in bed to recover. 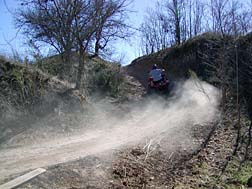 The accident occurred on April 3, 2006. Foster says he is healing up well, although he notes he does not let pain affect him too much. "I couldn't do anything for five months," Foster says. "But I'm just not one to lay on my back. I had to go back to work. You don't have much choice when you have a wife and a kid."

In all his years of ATV driving, Foster says he has never experienced any vehicle tip over as easily as the Yamaha Rhino did. "I've never been in anything like that before," Foster says. "It tipped over too easily. I was just barely going up a hill."

More News
Foster says the design of the ATV contributed to his injuries. "I probably would have been fine if the ATV had doors on it," Foster says. "But when you're in a rollover, your natural instinct is to get out of there. I tried to get out of it, but the top roll bar landed on me."

Even experienced ATV drivers are being seriously injured in Yamaha Rhino rollovers. These injuries take a long time to heal and result in large medical bills and time off work to recover. Yamaha Rhino rollover accidents are happening to careful drivers who are not traveling at high speeds or performing risky maneuvers. They happen even at very slow speeds when the driver is simply attempting to turn the vehicle around. Unfortunately, the Yamaha Rhino is prone to rollover accidents at slow speeds, which is what makes it so dangerous.