Still No Recall on the Yamaha Rhino ATV Despite Rollover Accidents

Despite the amount of Yamaha Rhino ATV rollover accidents in which hundreds of people have been injured and even killed, there has still yet to be a recall on the recreational vehicle. Various consumer advocates state that the reason for the rollovers is due to a flaw in the vehicle's design. It was in 2007 that Yamaha responded to the safety issues by performing free modifications on the vehicles in order to make them safer, but as of February 2008, there has yet to be a recall issued by Yamaha or refunds issued to Rhino owners.

ATVs have always been known for their risk of rollover. These three or four wheeled vehicles are used for recreational purposes such as "off-roading" and even riding on smooth terrain. Many of these ATVs weigh as much as a quarter of a ton and are designed to accelerate to speeds of up to 55 MPH. 75% of ATV accidents cause very serious damage to the spinal cord or the head of the drivers and passengers of ATVs, making head injuries the primary cause of lifelong physical disabilities and injuries that can be life threatening. As for spinal cord injuries, they can result in lifelong paralysis of part or all of the victim's body. 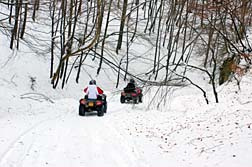 However, almost all ATVs are accident prone, but the Yamaha Rhino ATV has a higher incidence of rollover accidents compared to other ATVs. The Yamaha Rhino is also known to produce even more serious injuries and has a higher likelihood of resulting in death. According to critics, the reason for this is because the vehicle is top heavy with narrow tires. Such a design makes rollover more likely when making a turn, even when traveling at slow speeds on level surfaces. Also, the Rhino's design offers no protection for the legs of the passengers, which means even further injuries are likely with the Rhino. Injuries such as crushed or broken legs are definitely not an oddity when a rollover incident occurs with this ATV. There have actually been cases in which accident victims have had to have limbs amputated. If children are involved, the accidents are most likely to be fatal.

More News
Yamaha did not immediately acknowledge the rollover issues associated with the Yamaha Rhino ATV. The Rhino hit the market in 2003 and not until 2006 did Rhino owners receive a letter that warned the Rhino was prone to rollover when taking sharp turns. However, it seemed that the letter was placing the rollover blame on the drivers and passengers of the vehicles by the way the letter was worded. The warning that Yamaha provided in the letter was that all passengers needed to utilize seatbelts and keep arms and legs inside of the vehicle. The letter also provided recipients with information regarding what to do if the Rhino started to tip. Nevertheless, accidents while driving the Yamaha Rhino ATV has not decreased since the letter was distributed in 2006.

It was 2007 when the issue was taken more seriously by Yamaha and the company began offering their free modifications. The modifications included adding handholds and doors to the Rhino. However, as of February 2008, Yamaha has yet to issue a recall or offer refunds to Rhino owners. As of now, it is not known if the free modifications that Yamaha performed on these Rhino ATVs in 2007 will have an impact on the safety of the passengers. Nevertheless, there are still a number of lawsuits being filed against Yamaha for their alleged lack of seriousness in the matter when rollovers began occurring in the vehicles as early as 2003.