There is little doubt that Americans love their Yamaha Rhinos. They're cute, and carry the potential to be personalized with a myriad of available accessories. Rhino aficionados gather for 'Rhino Rides' where customized machines are displayed with all the pride of a new father. But either these people are oblivious to the risk, or are thrill-seekers who just don't give a hoot about the danger and risks associated with ATV crashes. 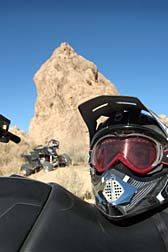 ATVs have proven to be a scourge for safety experts concerned over the steadily rising ATV accidents that claim both limbs, and lives. Even riders who wear helmets are no match for the dynamics that are associated with a vehicle with a high center or gravity, stiff suspension and oversized, balloon tires that are prone to 'bounce.' This trait lends itself to the instability associated with most ATVs.

The worst were the three-wheeled varieties that were outlawed several years ago. That is to say, manufacturers were no longer allowed to make them—but owners have not been disallowed to own them. They're still around, and this writer can attest to that.

A few years ago I was visiting friends, who invited me try to out a three-wheeled ATV that was obviously several years old. Delighted, I strapped on a helmet and took off—slowly and cautiously—through the back lot of their rural home.

Yes, the terrain was uneven. And yes I was inexperienced, with lots of hours logged on go-carts in my youth, but never an ATV. I took it slow and easy like a duck. And yet, when the front wheel encountered a mound of earth I didn't see, I had suddenly popped a wheelie I hadn't anticipated, and the force of the up-ending caused me to accidentally throttle up the ATV, which resulted in even more air. For seconds that seemed like hours I drifted high on my back wheels dangerously at risk of tipping backwards before the unit finally righted itself.

I was petrified. I was only on the thing for two minutes, and I very nearly broke my neck. The helmet would not have helped.

That's the problem with these things. An ATV is quite rightly a utility vehicle that somehow has become a recreational plaything. It is a vehicle that requires proper training, but few in America acquire that training. And even those who do, and who become skilled at their operation, wind up dead or seriously maimed from an ATV rollover.

The Yamaha Rhino has served as a lightning rod to the dangers of the ATV, if it has at the same time failed to be stifled by those concerns. For several years now media reports have featured the alleged shortcomings of the Yamaha Rhino—among them a high center of gravity, narrow tires and a propensity to rollover. The only apparent response from Yamaha to such reports, and the lawsuits that have stemmed from them, was to offer a retrofit to all Rhino owners for half doors, additional safety handles, and a reminder to wear a helmet.

However, there has never been a formal recall to repair alleged design flaws, a fact not lost on one of the latest litigants injured in a Yamaha Rhino. Scott Smith, a 42-year-old man from Twain Harte, California filed a personal injury lawsuit against the Yamaha Motor Corporation this month in California Superior Court, alleging that the Rhino side-by-side ATV is dangerously unstable and defective.

He should know. Almost two years ago to the day, August 20th 2006, Smith was a passenger in a 2006 Rhino that is purported to have tipped at a slow rate of speed. He suffered severe injuries to his right leg, and was left permanently impaired.

"The Rhino incident has had a devastating impact on my life," Smith says in a statement. "My right leg was crushed by the Rhino's roll bar. The pain has been unbearable. For over a year I was confined to bed while having to undergo seven surgeries. I will never again be able to hike, ski or participate in other outdoor activities that I enjoyed."

Beyond retrofitting all Rhinos with half doors and passenger hand holds for the model years 2004 through 2007, the manufacturer added the improvements as standard equipment beginning with the 2008 models.

However, it was noted that no other safety improvements or design changes have been forthcoming, and despite hundreds of Rhino rollover accidents there has been no formal recall.

Perhaps, to the company, the odd lawsuit by a person with a leg maimed for life is worth avoiding the public relations fallout from a formal recall…