In any ATV rollover it is easy to blame the driver of the vehicle, to assume that he or she was inexperienced, driving too fast or taking too many risks. But what about when that accident happens to a man with years of experience, who was simply moving a Yamaha Rhino from one location to another at his workplace? 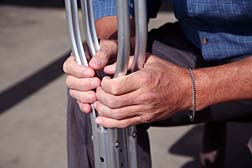 "About a year and a half ago, I worked for a dealership," Bob says. "I was moving the Rhino from the warehouse to the front parking lot like we do every morning. I was on gravel and making a right turn at about maybe five miles per hour. It was a sharp right turn and the machine tipped over. My leg fell out and was crushed by the rollbar.

"Some guys came and picked the machine off me. I went to the hospital and my leg was squished and burst open at the calf. I wound up having minor surgery but I have a six-inch scar on my leg. I was off work for a week and a half, although I should have stayed off longer—I couldn't afford to not work. I lost a lot of wages because I was off work and then, when I was at work, it was hard to chase down customers being on crutches.

"I got my first dirt bike when I was 10 years old and I've been riding since I was five. I owned by own ATV business and I am a very experienced rider—this was not a mistake by an amateur. The ATV was extremely easy to tip over. I would have never expected that to happen. I've ridden in Rhinos a lot—it was the nature of my business and the nature of selling them—and I was never faced with this particular situation before.

"The only thing that might have added to it was a small indentation in the ground—not even a mudhole—and the weight being on the left. But it was way too tippy.

"Something like this happens and you think it's your fault. Then you hear all these stories and realize that you're experienced and the ATV shouldn't have rolled over. But I didn't think about that at first. I just assumed it was my fault.

"When companies put stuff like that [ATVs] out there, they have to be safe. I've been riding for over 30 years and I was moving the ATV at work, so there was no drugs, no alcohol and I was moving slowly. Now my leg is maimed for life. These companies should be more careful.

More ATV ROLLOVER News
"I am extremely experienced and at one time I personally owned about 20 ATVs. Now, it's just a shame because ATVs aren't a part of my life at all. It's been really difficult. The accident changed my life. I don't even own one ATV any more. I decided that ATVs are too dangerous and I only have one body. Shortly after the accident I sold my ATV because I didn't want anything to do with it."

If someone as experienced as Bob can be in such a serious accident, imagine how easily younger, less experienced riders could also be involved in an accident, through no fault of their own. The truth is that many ATVs are designed in such a way that they tip over too easily and do not properly protect riders from serious injury.

If you or someone you love was harmed in an ATV rollover, contact a lawyer to discuss your legal options.