"Yamaha Rollover Caught Me Off Guard"

You were just out for ride on your Yamaha Rhino, enjoying the summer weather, when suddenly your vehicle rolled over and in an instant your life changed. Like many other people involved in ATV accidents, you wondered if you did something wrong, if you could have prevented the accident.

However, you soon learned that many people, even experienced ones, are involved in Yamaha Rhino rollovers. Why? Because the Rhino ATV was built in such a manner that it can tip over too easily and at low speeds, making even experienced ATV drivers a risk for such accidents. 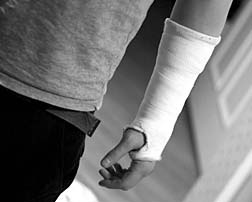 Robert P. (not his real name) says he has been riding ATVs since the early 1980s, so he is quite experienced and understands the dangers associated with the vehicles. Despite this, he found himself pinned under a Yamaha Rhino in 2006, in an accident that caused severe damage to his wrist.

"I had purchased a 2005 Yamaha Rhino, and I was riding along the river down behind my house," Robert says. "I went down into the river a bit where it was shallow, came out and then turned around to go back in. As I turned the Rhino around, it tipped over. As the Rhino tipped over on the driver's side, by automatic instinct, I put my arm out to brace the fall. The rollbar came over on my wrist and shattered it.

"I was already disabled and couldn't pull myself out from under it. I tried several times and then I called some friends but no one was available. So, I called 911. They came and extricated me from the Rhino, and then they put me in an ambulance and took me to the hospital. I was released to receive further services from orthopedics.

"I ended up going to the VA [Robert is a disabled veteran] where they repaired my wrist. I have a metal plate with screws implanted to hold the bones of my wrist together."

Robert required only one surgery to repair his wrist, but he says that he had to undergo extensive physical therapy and will likely not regain full range of motion in his wrist. He says he will also likely have the plate and screws in his wrist for the rest of his life.

More YAMAHA ROLLOVER News
"I felt the Rhino rolled over too easily. It caught me off guard; I was really surprised that it rolled over. I have been down at the river several times and on my Rhino several times. I was in a sandy area when I went to turn around and it rolled right over. The area was quite flat; there was no incline. I was probably going only 10 mph, 15 mph at the most. I was not going very fast at all. I try to stay out of those types of environments now.

"I really enjoy my Rhino, I can't say too much bad about it, but I do feel it should have been noted that it tips over too easily."

Many people are learning how dangerous some ATVs, such as the Yamaha Rhino, can be. Some people suffer minor injuries in ATV rollovers but others endure very serious injuries and some people do not survive their ATV accidents. Unfortunately, many ATV accidents are caused by vehicles that rollover too easily or are not properly equipped with safety features.

If you or someone you love has been injured in an ATV rollover, contact a lawyer to discuss your legal options.