People who have been injured in Yamaha Rhino ATV rollovers can tell you that they have experienced extreme pain after the accidents. Many have required multiple surgeries to fix the damage done to their bodies and some have even had limbs amputated because the injuries were so severe.

What is so surprising about the Yamaha Rhino rollovers is that they occur at very low speeds. In fact, Traci Klein (not her real name), who was involved in a Yamaha Rhino rollover, says that the ATV she was in was only going seven miles per hour when it flipped over, but the accident caused serious, permanent damage to her leg.

Two years ago Klein was a passenger in a Yamaha Rhino. She says that her friend was driving on flat ground and was making a right turn when the Rhino, which is top heavy, rolled over. Klein was thrown from the ATV. Her foot planted in the ground and her body rolled twice. 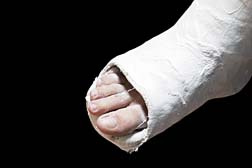 As a result of the accident, Klein suffered a double compound fracture of both lower leg bones, which actually broke and came through her skin. She required 10 surgeries and spent two months in the hospital. "My leg is deformed, but at least I have it," Klein says. "I am able to walk on it."

A titanium rod was put in Klein's leg to help fix it. Klein says the accident has had an impact on her daily life. "I can't bend my knees, I can't run and I can't jump," Klein says. "My leg is very tender. The titanium rod goes near my ankle and if you touch it the wrong way it hurts a lot."

More News
Klein returned to work after six months, although she says she probably should have taken more time to heal. The irony of the situation was that at the time of the accident, Klein worked for a Yamaha dealership (she does not any longer). Despite having worked at a Yamaha dealership, Klein says she did not know anything about the possibility of a rollover accident.

"When I was in the accident, the first warnings hadn't been issued about rollovers," Klein says. "Now, they have warnings posted on the rollbars, but my accident was before that happened."

Luckily, Klein was able to keep her leg. Many other Yamaha Rhino rollover victims have not been so fortunate. Some have required amputations, while others have even lost their lives. For these people, Yamaha's warnings are too little, too late.