An army veteran who underwent a necessary surgical procedure on his penis has launched a VA hospital malpractice lawsuit after frostbite, and then gangrene set in necessitating the removal of a five-inch section of the plaintiff's penis. Michael D. Nash of Louisville, Kentucky is seeking $10 million in compensation. 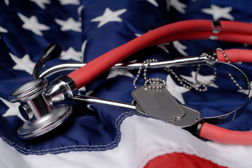 According to the Associated Press (AP 10/2/12), Nash attended the VA hospital in Lexington for the insertion of a penile implant and circumcision. Following surgery, according to AP, his groin was packed in ice to reduce swelling following surgery.

Nash's medical malpractice lawsuit alleges that rather than leaving the ice packs in place for no more than two or three hours, the icepacks were repeatedly changed and remained in place continuously for a period of 19 hours. The exposure caused frostbite to the plaintiff's penis, and gangrene soon set in.

According to his VA hospital malpractice lawsuit, the plaintiff lost five inches of his penis in a subsequent surgery to stem the further spread of gangrene, can no longer urinate normally and will require additional reconstructive surgery.

Medical malpractice lawsuits are launched when patients are allegedly made to suffer due to incorrect or sloppy care on the part of doctors, hospitals or medical staff. This is especially true of VA hospitals, some of which have been known to cut corners and compromise the care and condition of the veteran.

More MALPRACTICE News
Nash, 61, served his country in the US army in 1968 and 1969. Initially pursuing compensation under the Federal Tort Claims Act, his claim was rejected by the Department of Veterans Affairs in July. "It is our opinion that there was no negligence on the part of the Department of Veterans Affairs or any of its employees in connection with the claimed loss; therefore your claim is denied," wrote Melinda Frick, Indianapolis-based regional counsel for the VA.

Nash, whose initial surgery was performed in late October 2010, filed his VA lawsuit October 1 of this year in US District Court in Louisville. His veteran's lawyer noted there would be no lawsuit if Nash had suffered temporary frostbite and a little burning. However, the eventual loss of much of his penis, not to mention his manhood and the capacity to urinate normally is something, say his VA medical malpractice lawyers, they would not wish on their worst enemy…

Posted by
ROBERT GIRARDO
on December 6, 2018
MY BROTHER IN LAW IN HOSPITAL OVDER 50 DAYS .WENT IN HARLLUCINATION DENETIA, CANNOT LIFT RYED TOSAY IT WASDE AND CANNOT WALK WAS IN VEUTNAM 18 MONTHE MARINE, WE TOLD THEM ABOUT THE ISSUES AND THEY TRYPUT ED TO SAY IT WAS NOT SERVICE RELATED ,DEPRRESION, THEY GAVE HOIM LATURDA, THE MED IS FOR BI POLAR ISSUES AND NHAS WARNING DOT TO GIVE IT TO ANYONE OVER 65 WITH HALLUCINATION , OR LOSS OF REALITY, WHEN I TOLD THEM THEY TOOK HIM OFF IT STIL L NO DIAGNOSIS MADE COMPLAINT TO WHITE HOUSE COMPANT NUMBER ADMINISTRATOR WAS BULLYING HIS WIFE MY SISITER TO PUT HIM IN VA REHAH , IE SO THEY COULD CONTINUE WITH FALASE , IE AND NOT PAY BENFITS ., THE ADDMINISTRATOR LIED AND SAID , ALOT OF CRAP AND NOW SISTER IS GETTING HIMM INTO KESSLER, THEY THE DOCTOR AND THE TEAM ARE LOOKING SCARED, AND FUMBLING CLAIMING THAT THE PATIENT DID NOT COPOPERATE, SO THEY COUKD NOT SEND HIS MEDICAL RECORD TO ZKESSLER I WANT TO TALK TO SOME ONE A LAWYER NOT AN OPERATOR 609 224 xxxx
ROBERT