A former worker at a coffee production facility in California has hit Keurig Green Mountain Inc. with an Unpaid Wages lawsuit alleging his employer failed to pay for time spent donning and doffing sanitary protective gear at the start and end of each day, as well as prior to and following meal breaks and rest periods. The plaintiff has put the lawsuit forward as a class action. 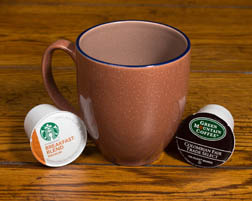 The donning and doffing lawsuit was filed by Alvaro Sanchez, identified as the lead plaintiff in the proposed class action against Keurig. According to court documents, Sanchez worked at Keurig’s manufacturing plant located at Castroville, in California. His complaint is that workers were required to stand in line each day prior to and after work to don uniforms and protective equipment necessary to the sanitary environment on the production floor.

Sanchez notes in his unpaid wages claim that workers were also required to remove their protective gear and uniforms prior to leaving the controlled production area for meal breaks and rest periods, only to don them again for the resumption of their shifts. Not only did the process serve to cut into their meal breaks and rest periods, or so it is alleged, the process of constantly donning and then doffing uniforms and protective gear was not paid by the employer, representing off-the-clock work.

This, “on a daily basis is substantial time, and deprives plaintiff and the class members of wages lost (both straight-line and overtime) each week,” the complaint said.

More UNPAID WAGES News
Sanchez, who worked at the facility from November 2012 to March 2013, alleges that Keurig failed to pay California unpaid wages promptly within 72 hours of the end of employment as required under California labor law and other statutes. The plaintiff also asserts that Keurig did not provide complete and accurate wage statements, as mandated by federal statutes and the California labor code.

The donning and doffing lawsuit, filed with the help of Sanchez’ unpaid wages attorney, seeks to represent any similarly situated individual who might have been employed at the Keurig Castroville facility over a four-year period beginning in June 2011.

Castroville is located near San Jose. The donning and doffing lawsuit is Alvaro Sanchez v. Keurig Green Mountain Inc., Case No.15-cv-04657, in the US District Court for the Northern District of California.