College Student Dragged by Truck on Way to School

What started as a normal drive to school ended in absolute terror for Mini, when she was involved in a truck accident. Her car was hit by an 18-wheel semi-truck and then dragged. What is even scarier is that the huge tractor-trailer driver didn't even know he had crashed into her, and he dragged her, in her car, for more than a mile.

It happened ten years ago, by Mini still remembers it vividly. She was studying algebra at college. Like any other day, she was awake by 6 a.m., left the house by 7 a.m. and was heading for school. She had planned to meet a girlfriend for breakfast, but she never arrived. 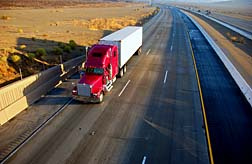 Driving her brand new Honda Civic along the I-95, Mini had her window open wide. What happened next defies the imagination.

A semi-truck driving alongside her on the freeway came a bit too close, and the step leading to the passenger's side door on the truck caught Mini's open window and half-lifted, half-dragged her vehicle.

"I was going about 55 mph; the speed limit. It happened before my exit, in between the two exits," she said. "The truck latched onto my driver's side window, took off the side-view mirror and pushed me along for a mile."

Then, propelled by the speed and force of the semi-truck, Mini's Honda Civic was thrust in front of the fast-moving semi and pushed some more.

"I ended up perpendicular to him, in front of him like a toy. I was facing three lanes of traffic zoom, zoom, zooming by. I didn't know if I was going to go into the wall or hit somebody," she said. "I was so low in front of his engine. It didn't feel like he slowed down at all."

Ultimately, whether by luck or skill, Mini decided to try something. She hit the brake at the same time as she turned her wheel. In an instant, she was released from the grill of the semi-truck and thrown back into the freeway traffic, coming to a stop in the wrong direction, facing the on-coming cars.

"I was reversed. I did a circle. He just kept going."

The police arrived after Mini came to a stop, having been called by some terrified passers-by. Police eventually caught up with the semi-truck driver. Mini is certain he was either drunk or tired, or both, she said, as he wasn't even aware that her Honda Civic was attached to his semi-truck.

The Honda was a write-off. Mini, on the other hand, had to deal with the after-effects. She suffered from whiplash, was in constant pain and had to stop working in sales as she couldn't stand for any length of time. She had to take a few semesters off from College. An athlete, Mini could no longer roller blade, as she loved to do.

The worse damage was inside. She was scared to death. She jokes now that she considered becoming like the title character in Driving Miss Daisy and having friends chauffeur her around, but she was determined to overcome that fear. It took months of medication for her nerves and for the pain, but she persevered.

More TRUCK ACCIDENT News
"It took me out for about nine months," she said. "Looking at me you couldn't tell but my nerves were shot. I was on very strong pain killers, like horse pills, they were so big."

She said her doctor told her she was lucky to be alive, and she feels very lucky. The same week of her accident, there were seven more truck accidents in Florida. In every case, someone died.

Ten years later, she is still scared of trucks, but won't let fear rule her actions.

"My accident changed my life," she said. "If this story helps someone else, it's a good thing. If it helps fix the truck companies and get tired or drunk drivers off the road, it's good, too."