Truck Accident: Dealing with the Aftermath

When people think about truck accidents, they usually think about the physical injuries involved. They imagine the physical consequences but do not consider how they will be treated by the truck's owners after the accident. Unfortunately, how victims are treated after an accident can be almost as difficult to endure as their physical injuries. This is what Art M. had to deal with after his truck crash.

On August 4, 2006, Art was driving on a large boulevard when, out of the corner of his eye, he noticed a big truck run a stop sign. Although he hit his brakes, Art's vehicle and the truck collided, causing Art's vehicle to be totaled. Art also suffered physical injuries in the accident. 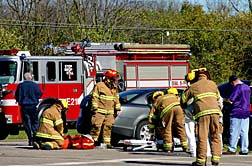 "He [the truck driver] was quite elderly and was driving the truck for the first time in a populated area," Art says. "He was looking for a stoplight and realized at the last minute that he ran a stop sign. He said that he had never been to Orange County and never seen so many cars in his life. I looked at the registration on his truck and saw that it was owned by a big mining company. I submitted my claim to the mining company, but they downplayed every claim I had. Every out-of-pocket claim I had, they said was excessive.

Art's injuries include a bulging disc in his neck, chronic lower back pain, a knee injury, a mild concussion and mild facial lacerations from broken glass. "I've gotten over the bruises and bumps, but I haven't been compensated for my medical bills, lost wages or the cost of a new vehicle. I've lost five-and-a-half months worth of wages and been in and out of hospital. There are also two-and-a-half years of physical therapy, orthopedic work, minor surgery and pain management treatment.

"My vehicle was a total loss," Art says. "It seems like the big truck companies get away with not paying anything. It is futile because the truck company has staff and resources to thwart getting compensation. I was offered between $2,000 and $5,000 or nothing. And they would make it appear as if the accident was somehow my fault, even though the police said the other driver was 100 percent liable.

More TRUCK ACCIDENT News
"It's quite frustrating. The police report shows I was in the right. He [the other driver] was not competent to drive the truck. His license was restricted because of vision issues, but the company allowed him to drive the truck. Then they try to blame me for the accident. It's just not fair."

Truck accidents happen every day. Some are fatal, while others involve serious injury. Many trucking companies have legal experts who can make it difficult for victims to receive compensation for their claims. Hiring an attorney who specializes in truck accidents can make the process easier and can help to ensure that you get the compensation you deserve after a truck accident.