Birth Defects and SSRIs—How's a Mother to Know?

In 2006, Elissa's doctor prescribed Cymbalta to help with her depression. Shortly after starting on the antidepressant Elissa became pregnant. On her doctor's advice she continued taking Cymbalta. But it soon became apparent her baby was developing life-threatening defects.

"I had my first ultrasound at 3 months," Elissa said. "That's when I found out something wasn't right. The doctor explained that my baby appeared to have a heart defect, a hole in her heart. Shortly after Elissa's baby girl was born, prematurely, the infant had to undergo heart surgery to repair the damage that could have been induced by the antidepressant. But Elissa was not aware of the association between SSRIs—or selective serotonin reuptake inhibitors—and birth defects.

Women Not Informed of the Risks of SSRI Birth Defects 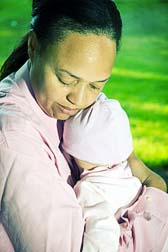 Elissa, like so many other women, found out about SSRI-related birth defects quite coincidentally. "I saw the ads on TV. I remember saying to my husband, 'I knew it'," she said. "I had a strong suspicion that Cymbalta was responsible but I couldn't prove it."

In fact a study of almost 500,000 women, published in the Annals of Internal Medicine in 2007, found an alarming 50 percent of women taking a prescription drug during pregnancy were not aware that those drugs could cause birth defects because they had not been warned about getting pregnant while on the drugs. The investigators of the study noted that women being prescribed drugs like SSRIs, which are associated with the development of persistent pulmonary hypertension (PPHN) in newborns, should be counselled about the risks before they begin taking the drugs.

Antidepressants known as SSRIs include Paxil marketed by GlaxoSmithKline, Prozac by Eli Lilly, Zoloft by Pfizer, and Celexa and Lexapro sold by Forest Laboratories, along with various generic versions of the drugs. The closely-related class of SNRI antidepressants also carry birth defects warnings and include Wyeth's Effexor and Lilly's Cymbalta. In July, 2006, the Food and Drug Administration (FDA) ordered manufacturers of SSRIs and SNRIs to carry warnings on their labels about the risk for PPHN. This was based on a public health advisory issued early that year, which stated:

More SSRI BIRTH DEFECT News
Of all the SSRIs to come under fire, Paxil is possibly the most widely publicized. In 2005, the FDA issued a public health warning regarding Paxil. The warning was based on findings from 2 studies that showed an increased risk for birth defects in babies born to women taking the drug during pregnancy. In fact, the studies showed a 1 to 2 times greater risk of having a baby with a heart birth defect while on Paxil. In conjunction with the warning, the FDA placed Paxil in its second highest category of drugs known to cause birth defects.

As if any more proof was needed, a study published in the November 2008 issue of the British Journal of Clinical Pharmacology reported a 3 times greater risk for heart defects in babies born to mothers taking either Prozac (fluoxetine) or Paxil. The study looked at babies born to 800 women who said they took either drug during the first trimesters of their pregnancies. Comparison was then made to 1,400 expectant mothers who were not on antidepressants of any kind.

While it is good that the studies are done, it seems the information comes too late for women like Elissa and her baby girl. Elissa wishes she had been better informed, that somebody would have talked to her about the risks of SSRIs and birth defects. As a result, she is sharing her story.