When Susan (not her real name) gave birth to her now 5-year old son, he had a lung and heart deformity. Susan had taken the anti depressant Zoloft, albeit briefly, during her pregnancy, and given all she's subsequently read, now wonders if her son's birth defects are SSRI-related birth defects. 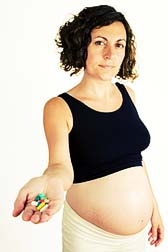 When Susan's son was born, he wasn't breathing. The medical staff had to resuscitate him and place him in an incubator. He was then diagnosed with pectus excavatum. "It's a lung and heart 'deformity' I guess you would call it," Susan said. "It's supposed to be hereditary but no one in our family has this. My son also has breathing problems, and some type of brain damage which had to be in uterus and caused oral and verbal apraxia."

Apraxia is an impairment of the nerves or nervous system that affects a person's ability to plan, execute and sequence motor movements. Verbal apraxia affects the programming of the articulators and rapid sequences of muscle movements for speech sounds. Oral apraxia involves nonspeech movements e.g., blowing, puckering, licking food from the lips – those kinds of things.

"My son didn't talk until much later than is considered normal," said Susan. "When he was 2 he just mumbled. And there were other things like he couldn't put his tongue in his cheek, for example. He went to speech therapy for 2 years; that helped."

So far, Susan has yet to receive any kind of diagnosis for her son, beyond those given when he was born, making treatment difficult. "He's been tested for Autism, and the results were negative, but he does have behavioural problems, like anxiety and disruptive behaviour," she said. "They think he has sensory processing disorder - but they haven't given him a diagnosis of that. At one point they thought he had ADHD, and wanted to give him drugs for that but I refused."

Not surprisingly, Susan has been doing a lot of reading, prompted in part by a need to try and understand what's happening to her son, and in part by an ad she saw on television some time ago, describing SSRI birth defects.

"I saw a TV commercial and it got me thinking. I never thought that Zoloft may have played a role in his health problems, because my doctor said it was okay to take it," Susan said." I've read a lot, and I try to help my son. I love him, and I will do what I can for him. I wonder what the outcome would have been if I hadn't taken Zoloft. As a parent, I want to know why this has happened – what caused it – because it would provide some kind of closure."

More SSRI BIRTH DEFECTS News
SSRIs--also known as selective serotonin reuptake inhibitors--are a class of antidepressant. Until about 2005 there were no real warnings of the possibility of birth defects connected with the use of these drugs during pregnancy. All that changed, however, in 2005, when the first public warnings emerged from the Food and Drug Administration (FDA) about the potential for serious heart defects in babies born to women taking SSRI antidepressants during pregnancy.

SSRI Birth Defects
Susan's son was born in 2004, before any of the public warnings were issued, together with the studies showing the link between birth defects and SSRI use in pregnancy.

To say that the situation Susan and her son are in is frustrating would be an understatement. Had Susan known in advance of the possible consequences, she would not have taken an SSRI during her pregnancy.

Worse, Susan is not the only mother with questions. There are many women with similar stories to tell. Chief among the many questions they would like answered is why weren't the warnings issued sooner?