A man was seriously injured in a Springfield truck accident when he was run over by a flatbed trailer. 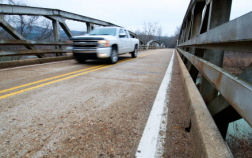 According to the Missouri Highway Patrol, Jeffrey Miller either fell or jumped from a moving Ford truck and was run over by the flatbed trailer it was towing, reports the Springfield News-Leader.

The 39-year-old Springfield native was taken to St. John's Hospital in Springfield to be treated for his serious injuries.

The truck accident occurred on Farm Road 127, just north of Springfield, according to the patrol.

There were 878 traffic fatalities in Missouri in 2009, according to the National Highway Traffic Safety Administration. Of those fatalities, 86 occurred in accidents involving large trucks, which was the lowest death total for such crashes in the last five years and down from 166 in 2005.

In Greene County, where Springfield is located, there were 30 traffic fatalities in 2009, only one of which involved a large truck. Similar to the statewide numbers, this was a five-year low and down from 12 such fatal accidents in 2005.

If you or a loved one have suffered losses in this case, please click the link below and your complaint will be sent to an accidents lawyer who may evaluate your Springfield Truck Accident claim at no cost or obligation.
Request Legal Help Now