Missouri State Highway Patrol troopers said recently that they have arrested the driver of a pick-up truck that struck an unlicensed go-cart in a Springfield truck accident, killing the driver of the go-cart. 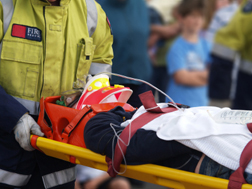 KSDK, a local television station, reports that 39-year-old Raymond Ridinger of Springfield and a friend were operating the go-carts at night near the James River Freeway.


Highway Patrol officers say that Ridinger's cart was being towed by that of his friend's when the friend reportedly slowed down to make a turn. However, despite slowing down, the cart being steered by Ridinger continued to move forward and was struck by an oncoming pick-up truck, investigators said.

Authorities said that Ridinger was pronounced dead at the scene of the crash, while the other go-cart operator and the driver of the pick-up truck were not injured in the collision.

Still, police arrested the 27-year-old driver of the pick-up truck and are reportedly expected to apply for warrants to charge him.

The Springfield News-Leader reports that Patrol Trooper Mike Adams said the go-carts did not have headlights or taillights.

If you or a loved one have suffered losses in this case, please click the link below and your complaint will be sent to an accidents lawyer who may evaluate your Springfield Truck Accident claim at no cost or obligation.
Request Legal Help Now