More RAILROAD News
An Omaha, Nebraska man was recently injured in a train car accident when he became stuck between a guardrail and the car at the MidAmerican power plant in Iowa, the Omaha World-Herald reports. 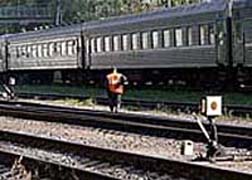 Michael D. McGillen Jr., 28, was brought to the Creighton University Medical Center by a medical helicopter in critical condition. According to Dwayne Riche of the Pottawattamie County Sheriff's Office, rescue officials arrived at the scene at approximately 3:00 am.

McGillen is reportedly an Iowa Interstate Railroad employee, according to the news provider.

Riche explained that the train car was backing up toward an entrance to Southwest Iowa Renewable Energy (SIRE), located on the power plant's property. The train then reportedly went through a closed gate and bent a guardrail, causing McGillen to be pinned. Riche added that the gate was supposed to have been opened up by an employee at SIRE.

After employees could not free McGillen, Lewis Township Rescue workers removed the guardrail in order to get him out, the news provider said.

According to the The Associated Press, the Iowa Interstate Railroad is investigating the accident.

If you or a loved one have suffered losses in this case, please click the link below and your complaint will be sent to an employment law lawyer who may evaluate your Railroad claim at no cost or obligation.
Request Legal Help Now

Click to learn more about LawyersandSettlements.com
LawyersandSettlements.com - A trusted, independent legal news provider bringing quality news and information on legal cases and lawsuits filed in the United States of America to its readers since 2002. Over 650,000 legal help requests including Personal Injury Cases, and Employment Law Cases have been forwarded to lawyers all across to the country.