More RAILROAD News
The Illinois Central Railroad Company (ICRC) is facing a lawsuit stemming from a purported railroad worker injury sustained by one of its engineers. 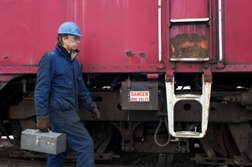 Jeffrey Garner, an engineer with ICRC since 1995, filed suit against the Chicago-based train company after allegedly suffering injuries to his elbow and wrist due to the repetitive motions required by his job. Garner's official complaint, filed with the Saint Clair County Circuit Court, claims that the long-term cumulative trauma caused him to develop permanent disabilities in his joints, according to the Madison Record.

Garner is seeking $50,000 plus court costs to cover wages lost due to his injuries, incurred medical costs and mental anguish.

In the suit, the engineer alleges that ICRC failed to provide a safe workplace, tools and equipment for their employees and promoted unsafe working methods and improper supervision. Garner also alleges that the company failed to adequately staff its trains, and it neglected to warn what few staff it had of the potential for developing cumulative traumas.

If you or a loved one have suffered losses in this case, please click the link below and your complaint will be sent to a personal injury lawyer who may evaluate your Railroad claim at no cost or obligation.
Request Legal Help Now