Thousands of Canadians and American cardiac arrhythmia patients with implantable defibrillators powered by faulty ion batteries and manufactured by St. Jude’s Medical Inc. and St. Jude’s Medical Canada are or will soon be eligible to join class actions suits in Canada and the US. 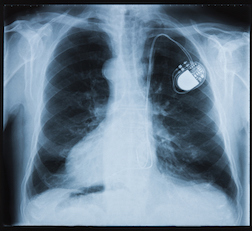 Attorney Paul Miller, from the Toronto law firm of Howie, Sacks & Henry has filed a class action in Canada that is awaiting certification. Similar class action cases involving the St. Jude’s ICD defibrillators are being prepared in the US.

“We understand there are probably about 8,000 people in Canada that have these defibrillators,” says attorney Miller.

Altogether, approximately a quarter million of the devices were sold in the United States and Canada. They include St. Jude’s Medical Fortify, Unify, and Assura and Unify Quadra Implantable Cardioverter Defibrillators (ICD) and Cardiac Resynchronization Therapy Defibrillators (CRT-D).

The devices are implanted under the skin and use an electrical charge to regulate or “pace” hearts that beat either too slow or too fast.

The lead plaintiff in the Canadian class action is Shirley Houle from Port Hope, Ontario.

According to the statement of claim filed in the Ontario Superior Court of Justice, on January 31, 2014 Houle’s cardiac surgeon implanted a Fortify Assura defibrillator under the skin in her chest and connected it to her heart muscle. Almost immediately Houle began to have “fainting spells”. In the fall of 2015 she experienced further erratic heart rhythms and underwent “semi-emergency lead revision surgery”.

In the documents, the lead plaintiff alleges that by 2015, St. Jude’s Medical Inc. had or should have had knowledge of a Duke University Medical Center Study from 2014 that identified problems with some of the lithium batteries in the device like the one Houle was depending on to keep her heart going. However, the lawsuit alleges, St. Jude’s kept quiet.

“My understanding is that there is no predicting which devices have batteries that will fail but they are all part of a warning for premature battery depletion,” says Miller.

In October, 2016, St. Jude’s medical issued a voluntary recall in the US for the above devices manufactured between 2010 and 2015 due to the risk of premature battery depletion caused by a buildup lithium clusters.

More RECALLED ST. JUDE MEDICAL RIATA DEFIBRILLATOR (ICD) LEADS News
In October, 2016, at the time of St. Jude’s Medical recall and the FDA recall, Shirley Houle was informed by healthcare providers in Ontario that her device was one of those affected and subject to battery failure at any time without notice. She became extremely anxious and went in what the documents describe as “analogous to post-traumatic shock”. Five months later Houle’s defibrillator was replaced with a non-recalled device and she was released from the hospital in Toronto three days later.

Plaintiffs in the Canadian class action are represented by Paul Miller from the firm of Howie, Sacks & Henry and the Waddell Phillips Professional Corporation both of Toronto.

If you or a loved one have suffered losses in this case, please click the link below and your complaint will be sent to a drugs & medical lawyer who may evaluate your Recalled St. Jude Medical Riata Defibrillator (ICD) Leads claim at no cost or obligation.
Request Legal Help Now