Pre-Settlement Funding Can Be a Lifesaver for Cash-Strapped Plaintiffs

It may have been around since 1997, but not a lot of people know about it. Pre-settlement funding: the capacity for a plaintiff to have access to funds while in the throes of a lawsuit or waiting for litigation to settle. It’s a loan that isn’t a loan, and is a rapidly growing financial service accounting for an estimated $100 million each year. 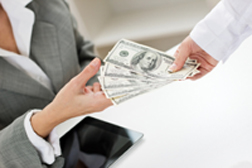 So what is pre-settlement legal funding, anyway?

Presettlement funding is a source for needed cash and is geared toward the plaintiff facing financial pressure while waiting for a lawsuit to settle. An accident, for example, where the other party is alleged to be at fault and thus has formed the basis for a lawsuit, may have left the plaintiff unable to work. Household bills may be stacking up. What’s more, a plaintiff may not have the best credit or lacks collateral. They may be in for a rough ride at the bank.

That’s where presettlement legal funding comes in. A plaintiff’s lawyer may refer the plaintiff to a firm like Lawsuit Financial Corp., which specializes in presettlement funding. Once the application is in place, a plaintiff can usually look forward to - at the very least - a lawsuit advance of a few thousand dollars or more.

These funds can then be used to pay household bills, credit card balances or any expense the plaintiff may find difficult to maintain while waiting for a lawsuit to settle. For a plaintiff facing foreclosure, a lawsuit advance can mean the difference between remaining in their home and finding themselves on the street.

“We help people who are waiting for a settlement or a judgment, people who need to make ends meet as they wait for a fair outcome of their case,” said Kelly Gilroy, executive director of the American Legal Finance Association, in comments appearing on CreditCards.com (3/29/13).

“It’s for living expenses,” she said. “It’s not for legal expenses. Frankly, most of these people don’t need this for legal expenses because their attorneys have taken the case for contingency fees. This is just some gas for them, so they can stay in the game.”

A lawsuit advance is a type of loan - and there are funding fees. As with any type of cash advance, there is no free ride. The difference here, however, is that the plaintiff has nothing to pay out of his or her own pocket. Funding fees are accrued over the life of the lawsuit advance, and when the settlement finally comes through, the advance along with the accrued interest is paid out of the resulting settlement.

It costs a plaintiff not a dime out of his or her own pocket.

If there is no settlement, there is no payday for the lawsuit advance provider. The plaintiff assumes no risk.

As indicated above, lawsuit loans can range from a few thousand dollars to tens of thousands, depending on the lawsuit and/or case involved, whether or not it’s a class action, and other variables. As an example, based on bellwether case outcomes, the DePuy defective hip case is prompting one company providing lawsuit loans to advance funds up to a hundred thousand dollars or more - but that’s the exception.

More PRE-SETTLEMENT LEGAL FUNDING News
For most, presettlement funding amounts usually range from a few thousand dollars on up, depending on the case at play and the expected range of a pending settlement.

As with any funding advance, it’s important to be aware of the terms upfront, together with all funding fees and related aspects associated with lawsuit loans. Reputable companies such as Lawsuit Financial Corp. take care to apprise the plaintiff of any and all terms associated with the arrangement.

However, the take-away message here for any plaintiff, who may be strapped for cash, is that there is a way to pay your bills with money advanced from the expected settlement to which you are entitled. You are not required to spend any of your own money you don’t have, and in the worst-case scenario - if there is no settlement, there is no requirement on your part to pay it back.

Presettlement legal funding is that simple.

Advertise With Us Legal Funding Index Get Our Newsletter