A three-vehicle crash January 11th on a busy California thoroughfare is noteworthy in that it involved two, off-duty sheriff's deputies. What's more, the crash could involve liability issues that may require the services of a California personal injury lawyer, and is being handled as such. Authorities were anticipating having to close down all eastbound lanes of Highway 4 west of Bailey Road, for a thorough investigation.

The fact that a crash on a busy, multi-lane California highway could involve two sheriff's deputies in two separate vehicles is somewhat eerie.

The crash occurred around 8:10am on January 11th, when a Saturn 4-door sedan driven by an off-duty San Francisco sheriff's deputy came into collision with a 1999 Honda CRV driven by an off-duty Contra Costa sheriff's deputy. The driver of the Saturn, a 45-year-old Oakley resident, was killed. The Contra Costa deputy was taken to John Muir Medical Center in Walnut Creek with minor to moderate injuries. 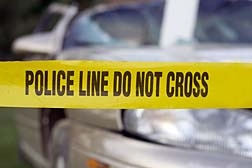 A third vehicle in the crash, a pick-up truck driven by a 52-year-old man from Antioch, was also struck by the deceased deputy's Saturn. The driver of the truck was taken to hospital with minor injuries. It is not known if the man will seek the services of a California personal injury lawyer.

The Saturn was traveling eastbound on the busy highway, in the midst of the morning commute. While published reports do not specify whether or not the accident was the result of a head-on collision, it is assumed that all three vehicles involved in the collision were traveling in the three, north-facing lanes of Highway 4 eastbound. A cause has not been determined, pending further investigation.

Highway 4 is a huge, multi-lane highway running through the Bay Point area of California. While investigators closed the three lanes most directly involved in the crash, the California Highway Patrol was leaving the door open to close the entire eastbound section of the highway, just west of the Bailey Road exit, if required.

The surviving, Contra Costa sheriff's deputy is a 42-year-old Brentwood resident assigned to the West County Detention Facility in Richmond.

If you have suffered personal injury, please contact a lawyer involved in a possible [Personal Injury Lawsuit] to review your case at no cost or obligation.
Request Legal Help Now