Nate's dad worked at General Motors (GM) for 42 years; he is now on disability and has been diagnosed with asbesteosis. Nate's mother died from lung cancer two years ago. "Is it possible that the whole family could have been exposed to asbestos, just from my dad's clothing, from doing the laundry together?" he asks.

"Spots showed up on my dad's x-rays and right now he is in the middle of a settlement with GM, along with a lot of other employees who were exposed to asbestos over the years. He was a millright and worked with casts for engine blocks; the material needed to withstand high temperatures so Dow Corning sold GM a product that contained asbestos—the perfect product, they thought."

But not perfect for humans. 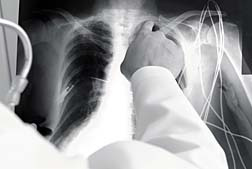 Nate's dad was exposed to asbestos for 42 years. Obviously he came with asbestos on his clothing—he didn't shower at work. Nate has never been tested but he is concerned. "I am only 41 and have my own family to consider, I want to know if that has caused some health issues.

"My father got a letter from GM saying that his case is coming up so he had to get another chest x-ray. He got the print-out from this x-ray and it was re-confirmed: spots are in every quadrant of his chest. The companies that have to pay want to do this last set of x-rays just to make sure everyone wasn't filing for bogus reasons."

Nate's mother was diagnosed with lung cancer just one year prior to her passing away. "She had chemotherapy but it finally got to a point within the last few months that there was nothing more they could do," says Nate. "Treatment just wore her out more than anything else.

"The only reason we found out that she had lung cancer was that my dad noticed she was acting funny. She started doing goofball things. One day he caught her trying to flush jewelry down the toilet so my dad took her into hospital for tests. That is when they found a tumor on her lung and it was taking something out of her body, causing her brain to short-circuit. The tumor was feeding off something that the brain needed to process.

It has crossed my mind to get x-rays and tests. My dad and I talked about it: what if I was exposed to asbestos and didn't realize it? I guess that I would also go after General Motors. And there is a part of me that doesn't want to know if I was inadvertently exposed."
On March 3, 2008 Frances Barras of Nederland, Texas sued DuPont and several asbestos manufacturers because she has developed mesothelioma from washing and handling her husband's dusty work clothes, not knowing they were covered with asbestos fibers. She washed his asbestos-contaminated work clothes for many years; her husband was a refinery worker at the Beaumont DuPont facility between 1957 and 1985.

Mrs. Barras sued DuPont because the company should have known, or did know, of the danger of asbestos exposure. It has been common knowledge for decades that providing showers and laundry services on site could prevent workers from carrying home industrial toxins to their spouses and children. Her attorney said that, "If DuPont had required use of these simple services, it would have protected Mrs. Barras as well as the families of other DuPont workers."

On February 28, 2008, the Birmingham Evening Mail reported on the rising number of unexpected workers in the UK affected by asbestos-related cancer. "Of greatest concern is the growing number of people like Margaret Worthington [who is dying from mesothelioma] who worked in jobs not usually associated with heavy exposed to asbestos and who have been diagnosed with mesothelioma. Worthington was a teacher.

An industrial diseases expert said, "These include teachers, hospital staff and family members exposed to asbestos dust on their loved ones' work clothes...more cases could be arising because asbestos was used in public buildings from schools to hospitals more than previously thought."

Back in the US: at a hearing on February 28, worker advocates urged house lawmakers to pass legislation banning asbestos, but industry representatives testified against the move. The House Energy and Commerce subcommittee on environment and hazardous materials held the hearing on the bill, which is dedicated to late Rep. Bruce Vento, who died of mesothelioma in 2000. The House bill, introduced by Rep. Betty McCollum (D-MN), would reduce the level of acceptable asbestos content to .25 percent. The Senate bill was changed at the last minute to include a 1 percent exception for asbestos materials, but not asbestos-containing products.

The Mesothelioma Applied Research Foundation (Meso Foundation) is also urging Congress to pass McCollum's bill, "Bruce Vento Ban Asbestos and Prevent Mesothelioma Act," and work with the Senate to get a bill to the president's desk this congressional session.