If Paxil doesn't Kill you with Guilt, Nothing Will

Kristie Crayne started taking Paxil in 2000 and stayed on it during her pregnancy. Her daughter Megan was born in 2001. "I met other Moms' in the hospital who had also taken Paxil," says Crayne. "None of us knew Paxil caused birth defects. When you are sitting together in NICU you talk about how you are coping with a sick baby. 'I love that pink pill,' other mothers told me; 'It helps me get through this.' We didn't know ..."

Megan was born with five major heart problems, including a hole in her heart that wouldn't close. She had transposition of the great arteries, a complete heart block and crooked valves—which causes leakage. 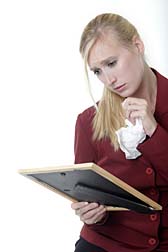 "The night before Megan was born, I had a severe pain in my belly—it doubled me over," says Crayne. "The next morning I called my Ob/Gyn and I went in for a stress test. They were trying to get a heart rate on her and at first, they thought they were hearing my heart rate, because it was in the low 60s. Her heart rate should have been minimum 120.

They hooked me up to an ultrasound and saw that it was actually her heart rate jumping from 60 to 120—she was jumping all over the map. I was immediately sent to the hospital. I arrived at 2.55pm and she was born one hour later, seven weeks early. My husband didn't even make it for the birth.

As soon as Megan was born, they injected her with drugs to increase her heart rate but it didn't do any good. A nurse did a cardiac ultrasound but she couldn't tell what was wrong, so they called in a pediatric cardiologist.

I was given an anesthetic for the C-section and when I woke they wheeled me in to NICU. I was hysterical, I was so distraught-- not understanding why her heart rate wouldn't come up. The doctor told me that she needed a pacemaker and open-heart surgery to close the hole and a band was needed on her pulmonary artery.

I didn't get to hold her until she was six days old and even then it was just for a few seconds. Her heart rate dipped to the 40s so she had to go back into the incubator. It broke my heart.

When she was 10 days old, we moved her to another hospital because the temporary pacemaker that was installed had perforated the lining of her heart and there was no place for the blood to go. She had a permanent pacemaker and the pulmonary band installed. Megan didn't come home until she was 28 days old.

You expect a baby to be born healthy and when they aren't you just feel horrible. I would take her place in a heartbeat for what she went through in her first year of life.

Her last open heart surgery was at 10 months of age, by this time she had gone through two open heart surgeries and a few other minor surgeries. At five months she had to be fed through a G-tube because she didn't have the energy to drink from a bottle (before that she was fed through a tube in her nose) and by 10 months, she couldn't even sit up.

Finally, at 15 months we didn't have to worry about her dying; I didn't have to wake up and worry if she would make it through the day. We were finally able to relax a bit and not go through this constant vigil.

Megan just had her sixth birthday and she is doing well, but she will always be high maintenance--there are a lot of things she can't do. She can't run very far and can't even walk any distance without getting tired. She is a fighter but her body restricts her; her body tells her to stop. She'll be running and all of a sudden just plop down on the ground because her heart can't sustain any great physical exertion.

We've explained to Megan why she has scars on her belly and chest. 'Your heart was sick and we got it fixed and your pacemaker makes your heart beat,' we told her. Megan is very strong-willed: she says her heart isn't sick. To this day, when we go back to the hospital every six months so that Megan gets her pacemaker checked, I get sick to my stomach—the memories are so vivid and horrific.

Last year I was online and read an article saying that Paxil may be linked to birth defects. If that doesn't kill you with guilt, nothing will. At first I was crushed - what I took caused my daughter this pain and agony. I can't describe the horror I felt.

More News
I phoned my husband and emailed the article to my mother-in-law. Right away they wanted me to contact a lawyer, but I didn't want to relive the nightmare, ever. They finally convinced me for Megan's sake, because she has so many issues, that we should seek legal help.

The makers of Paxil should have to pay this price because they weren't forthcoming in their knowledge of these birth defects. They knew and they did nothing, no warnings, no nothing.

I want to ask them how many children they have and if they are all healthy. Then I would ask each one them to get their wife pregnant and have her take Paxil. Would any of those executives allow that to happen?

My daughter is not collateral damage; she is flesh and blood! It is common knowledge that the drug company calls these instances (like my daughter's birth defects) the cost of doing business. But they must pay somehow. They don't care because they already made their money.
READ ABOUT THIS LAWSUIT