By now, it's no secret that military burn pits have had a negative impact on members of the armed forces and veterans, but these concerns can be seen directly at Jefferson Regional Medical Center in Clairton, Pennsylvania. 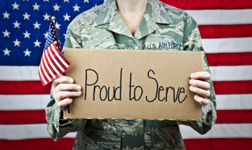 According to the Pittsburgh Tribune-Review, Bethany Airel Bugay is one veteran who has suffered the consequences of burn pit exposure overseas.

The burn pits are typically used by government contractors and the military in Afghanistan and Iraq as a means of disposing of waste, including chemicals and plastics. According the news provider, some of these pits extended for 10 acres and burned for entire days.

Bugay, who suffers from the rare blood cancer chronic myelomonocytic leukemia, now must undergo chemotherapy five days a month at Jefferson Regional, the news source said. She is also reportedly preparing for a bone marrow transplant.

While Bugay told the news source that she has no regrets about serving in the military, she firmly believes that her exposure to the fumes emanating from the burn pits led to her development of cancer.

More BURN PIT News
"It took 20 years for the military to admit that some of the warfare was dangerous to our soldiers and they were going to have long consequences years later," Bugay explained, referring to the effects of herbicidal warfare during the Vietnam War. "I'm afraid that's what's going to happen to our Iraqi veterans and Afghanistan. It'll take them forever to figure out that these (burn pits) are contributing factors to these illnesses."

The news source reports that, perhaps hearing these concerns, the Department of Defense closed all burn pits in Iraq last year. Defense Department spokeswoman Cynthia Smith told the news source that by the end of 2011, all burn pits at bases in Afghanistan with more than 100 Americans who have been there for at least 90 days will be closed as well.

According to the Oxford American, a number of lawsuits have been filed against government contractor KBR, Inc. and former parent company Halliburton in relation to military burn pit exposure. The burn pit lawsuits contend that the contractor had exposed American soldiers in Afghanistan and Iraq to deadly air pollutants through the burning of toxic waste, the news source reported.

If you or a loved one have suffered losses in this case, please click the link below and your complaint will be sent to a drugs & medical lawyer who may evaluate your Burn Pit claim at no cost or obligation.
Request Legal Help Now