And now, a potpourri of New York employment: A nurse whose employment was terminated after 24 years at Good Samaritan Hospital: and various employees of a restaurant on hard times who have been told by the restaurant's owner that he refuses to pay them because in his view lousy service by his New York employees drove customers away. 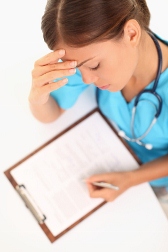 Blayne Minogue was employed at Good Samaritan as a licensed practical nurse when, according to New York Health Law Update (12/12) the hospital in January, 2007 opened a cardiac care unit. It was not long before Minogue observed what was described as a dramatic increase, according to Minogue's allegation, in the placement of acutely critical patients on non-critical floors of the facility.

Minogue directed a series of complaints towards the hospital with regard to patient care for a period of two years. Then, on June 9, 2009 Minogue's employment with the hospital was terminated based on an error in patient care.

After the trial court dismissed all of the plaintiff's claims save for those associated with New York employment law, both parties appealed the verdict to the appellate division.

In Minogue v. Good Samaritan Hospital et al 2011-03889 (Index No. 13198/10), the appellate court found that it was reasonable to believe the plaintiff honestly felt that conduct on the part of the hospital amounted to a lack of quality care towards the patients.

More NEW YORK LABOR LAW News
In the New York employment lawsuit, Minogue also alleged her termination was based on retaliation by the hospital for her continued allegations of substandard care. The appellate court therefore ruled the original trial court was correct in denying the defendant's motion to dismiss the claim.

As for the restaurant workers, Newsday (11/6/12) published a business self-help column that featured an account about a Farmingdale restaurant owner complaining to his staff that a slowdown in business??"which caused the owner alleged financial hardship??"was due to poor service on the part of his wait staff.

The learned reply from the columnist is that if the restaurant owner allowed his wait staff to work, he is duly obligated under New York state labor law as well as federal law, to pay them. Should he refuse, the wait staff has recourse to take their case to a New York employment attorney.