The world is going gaga over a New York employment lawsuit filed last week against Lady Gaga by a former boyfriend, who is purported to hold a 20 percent stake in one of two companies the singer uses to facilitate her career. 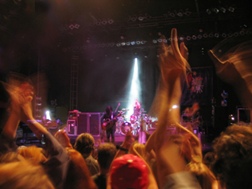 According to a 3/21/10 report in Newsday, songwriter and music producer Rob Fusari filed a $30.5 million dollar lawsuit against the Grammy award-winning pop star, alleging that Stefani Germanotta (Gaga's given name) unceremoniously abandoned him after her career began to soar. The singer won two Grammys in January for best dance recording and best dance/electronic album. She recently performed for Queen Elizabeth.

Fusari alleges that Germanotta was his protégé. He claims that they composed songs together—he cited "Paparazzi" and "Beautiful, Dirty, Rich"' as two examples—and that he came up with her unique stage name. Fusari claims that he also assisted the singer in securing a record deal.

Their relationship eventually turned romantic. But it also contained a business component through the creation of Team Love Child LLC, in which Fusari claims to have a 20 percent stake.

He filed his lawsuit in Manhattan on St. Patrick's Day.

Germanotta's legal counsel has fired back, charging that the agreement at the heart of the lawsuit was "unlawful," noting that the arrangement's true purpose was to provide to the defendants unlawful compensation for their services as unlicensed employment agents.

More NEW YORK LABOR LAW News
The Gaga camp claims that Fusari and Team Love Child LLC violated statutes that would have ordinarily prohibited them from acting as employment agents in view of the fact they didn't have a license, and for charging the singer an unlawful fee for their "purported services."

Fusari's lawyer disputes the interpretation, noting that Fusari is a bone fide partner in Team Love LLC with Germanotta and her father through a separate company known as Mermaid.

Robert S. Meloni, acting on behalf of Fusari, noted, "Rob [Fusari] was no more of an agent for [Germanotta] than she is a Roman Catholic nun."

Whether the situation winds up as a New York labor law issue, or is found to be a business or even a personal matter, remains to be seen. Suffice to say that New York employment and employment statutes in general are a sacred protection for employees, to ensure that they are not taken advantage of by an employer.