A lawsuit recently filed by the Equal Employment Opportunity Commission (EEOC) against an upscale New York City restaurant alleges various violations of New York labor law. Sparks Steak House is accused of allowing employees to be harassed in the workplace. 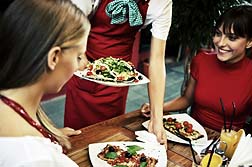 The EEOC alleges that male managers and other workers at the facility behaved in a way interpreted as abusive toward other male workers. The lawsuit claims that an employee who complained to the restaurant about the harassment was given less desirable assignments. The employee was ultimately terminated.

According to the action filed by the EEOC, male managers and workers at Sparks subjected male employees to ongoing abuse that included groping their buttocks, attempting to touch their genitals and rubbing their bodies into the employees while at work. The managers and co-workers also made numerous crude comments.

"The managers' and employees' offensive conduct at Sparks has absolutely no place in any working environment," said Charles F. Coleman Jr., a trial attorney in the EEOC's New York District Office. "When employees spoke out against the abuse, their pleas were either ignored or resulted in punishment. With this suit, the EEOC is sending the message that this type of behavior is illegal and will not be tolerated."

The alleged conduct violates laws and statutes prohibiting employment discrimination based on race, color, religion, sex (including sexual harassment or pregnancy) or national origin—and protects employees who complain about such offenses from retaliation. The EEOC filed the lawsuit in US District Court for the Southern District of New York after first attempting to reach a voluntary settlement out of court.

More NEW YORK LABOR LAW News
While the majority of all sexual harassment cases continue to involve women, there are more cases emerging that allege abuse against men by both male and female colleagues in the workplace. One of the reasons for this could be a new willingness by men to bring forward complaints of harassment. In the past, men were reluctant to complain about such harassment due to a fear that complaining was "unmanly."

"The EEOC is determined to stop sexual harassment whether faced by men or women," stated EEOC New York District Director Spencer H. Lewis Jr. "The objectives of this lawsuit will be to obtain fair compensation for those employees who suffered harassment and to implement policies that will help prevent discrimination."