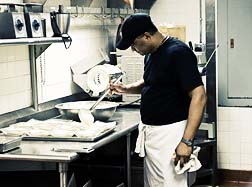 After exposing alleged wage discrimination at a local Thai restaurant, the Labor Department expanded its investigation to 22 restaurants in the Ithaca area. Of the various abuses of labor law exposed in the review, the most common offenses included withholding employee wages, tax evasion and bookkeeping errors.

The findings echo those of an earlier survey of restaurants performed in New York City, in which 23 Brooklyn-based restaurants were found to have shorted employees nearly $1 million in earned wages.

"In this economy, at a time when every dollar counts, all workers in New York State deserve to be paid fairly," said New York Governor David Patterson. "Restaurant workers in Ithaca and across the state work long hours and contribute greatly to our economy. We cannot afford to leave any of them behind. Laws are in place to be followed, and my administration is committed to making certain that both businesses and workers know their rights under state labor law."