In what is described as the largest recovery of lost wages in the building services industry in New York, the city's Comptroller's office announced a $1 million New York employment recovery and settlement agreement with Capital Cleaning Contractors Inc. The compliance award was negotiated on behalf of 33 underpaid New York employees. 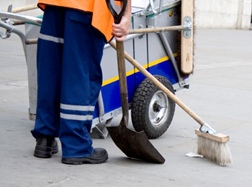 According to a press release issued by New York City Comptroller John Liu on July 20, the true villain in the matter was not Capital Cleaning Contractors Inc. (CCC) but rather a firm to which it subcontracted. Following complaints and an investigation, it was found that Velox Cleaning had failed to pay prevailing wages and benefits to the 33 workers in the city's Fire Department facilities.

CCC agreed to accept financial responsibility for the underpaid workers on behalf of its non-compliant subcontractor. The owners of Velox Cleaning also accepted a five-year debarment for falsifying payroll records.

This prompted an internal audit by the Fire Department, according to the comptroller's press released, which raised questions about the company's payroll records and Capital's failure to ensure that Velox paid prevailing wages to its workers as required by New York labor law and their contracts.

"As soon as we heard about this problem, the Fire Department began its own audit and then reached out to the Comptroller's Office for assistance so these workers could be paid in full for the work they performed," Fire Commissioner Salvatore J. Cassano said. "I'd like to thank Comptroller Liu and the members of his office for their successful efforts to right this wrong."

"When providing services on City-owned property, contractors are required to pay their workers prevailing wages and benefits as spelled out by the law," Comptroller Liu said. "These innocent employees came to work every day and performed their duties only to be cheated by their employer. This is a clear sign that we will continue to pursue contractors who violate the law."

Lui added that attempts to skirt New York state labor law will not be tolerated and will be met with the full measure of the law.
READ ABOUT NEW YORK LABOR LAW LAWSUITS