More News
A sleeping woman who was left on a United Express jet, only to be found by cleaning crews four hours after landing in Philadelphia, is suing United Airlines for false imprisonment, infliction of emotional distress and negligence, reports indicate. 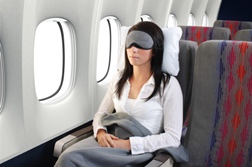 According to a report on MSNBC.com, 36-year-old Ginger McGuire, who lives in Ferndale MI, didn't wake up when the flight landed shortly after midnight on Tuesday. It wasn't until about 4 am that a member of the cleaning crew found her and reportedly locked her back in instead of helping her off the plane. She was later questioned by federal officials, who were concerned the incident might have been terrorist-related.

According to a report in the Detroit Free Press, Sarah Massier, spokesperson for United Airlines, said, "We are working closely with our partner Trans States Airlines to investigate the cause and remedy the situation with the customer." On Wednesday United said that it is investigating why the plane, which originated in Dulles airport in Washington, DC, wasn't cleared immediately after landing in Philadelphia. Trans States Airlines, a regional carrier, was not available for comment.