What you hear is what you get when you're talking to attorney Nancy Hersh. The daughter of the late LeRoy Hersh, she knew from the age of 12 she wanted to be lawyer like her father. In the 30 years since she graduated from law school, Hersh has built a solid, undisputed reputation as a skilled litigator and champion of women's health issues. 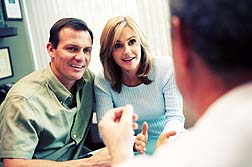 Hersh is especially known for her sharp criticism of the lack regulation around fertility clinics. She recently filed a suit against the Laurel Fertility Clinic in San Francisco after it used the wrong's man sperm to fertilize eggs belonging to Katherine Aschero, who was attempting to conceive through treatments at the facility.

"Most of these problems are related to lab errors," says Hersh. "There is no regulation of these fertility clinic laboratories where these particular jobs like fertilizing eggs or preparing embryos for transfer is done."

"If there was better regulation, I think we would not have these kinds of problems," Hersh adds.

After discovering the error, the clinic destroyed all Aschero's embryos without the consent of Katherine Aschero and her husband. "They had a written agreement that no embryos would be destroyed without written consent," says Hersh. "The suit asks that the Aschero be refunded the $80,000 they paid the clinic for the procedure as well as pain and suffering."

In another case handled by Hersh against a fertility clinic located in the same medical building, a woman was implanted with another couple's embryo. The suit settled for $1 million but has led to a complex and expensive custody battle.

"In this case they transferred an embryo that was not fertilized by the chosen sperm donor—it was just some 'guy' who was the husband of some woman," Hersh says. "He ended up with shared custody of the child—which has been nothing but heartbreak ever since."

More Negligence News
Hersh says medical laboratories that do routine blood tests take more care and are governed by more regulation that fertility clinic labs. "In all these incidents, they were doing things in a hurry, and just didn't take the care they should have," Hersh adds.

"When you go to hospital, they put a wrist band on you and 10 people check it before they give you a drug," says Hersh.

Hersh is very comfortable in the courtroom and says she 'loves a good trial'. She is not sure where the Aschero case is heading now. "I gave the clinic the opportunity to settle this ahead of time and they didn't take it."

Nancy Hersh is a founding partner at Hersh and Hersh in San Francisco. She earned her J.D. at the University of California at Berkeley, Boalt Hall School of Law and her B.A. at the University of California in 1967. She has been involved in groundbreaking litigation against pharmaceutical companies and the makers of medical devices including silicone breast implants. The firm also does mass torts.