When AirTran Airways decided to cancel its service to and from Charleston, South Carolina, the low-cost-carrier told the media, the chamber of commerce and its local contractors that it was pulling out. Unfortunately, it seems the airline didn't tell its customers. The airline's failure to notify passengers was much more than an inconvenience, says attorney Marlon Kimpson. In fact, the airline's actions constitute negligence and breach of contract that likely cost many AirTran Airways customers thousands of dollars. 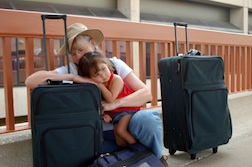 Kimpson represents schoolteacher Sandie Mallard in a class action suit for compensatory damages filed recently in Charleston County Court. The Mallards' family vacation to Cancun last Christmas more than tripled in cost because of the airline's failure to tell ticket holders the flights were canceled.

"People asked, well, doesn't she read the paper or watch TV?" says Kimpson. "But a business like AirTran Airways should not rely on indirect forms of communication. They had her email address and her phone number and Sandi Mallard's family had purchased full fare tickets."

The Mallards booked four round trip tickets to Mexico with AirTran Airways for $2000 in July 2009. Even though the airline knew in October knew it would not be flying out of Charleston at Christmas, it reconfirmed Mallard's reservations in November.

The Mallard family might have actually turned up at the airport; snorkels in hand, if Sandie Mallard hadn't checked the AirTran Airways website herself 22 days before they were scheduled for departure. She was forced to choose between spending $4500 to book four seats to Cancun at the last minute with another airline or give up on plans for Christmas on the beach.

AirTran Airways has yet to respond to the suit, but Kimpson says Mallard had to wait several months to have her original $2000 ticket refunded. "In our opinion, they have been very uncooperative."

More NEGLIGENCE News
There are likely many other AirTran Airways passengers who had to forfeit hotel reservations, rebook on more expensive flights or suffered business losses as a result of the airline's negligence.

"We believe there are hundreds passengers that were either leaving from Charleston or traveling to Charleston that experienced the same kind of situation," says Kimpson. "We think that the class action vehicle is the best way to adjudicate these common questions of law. We have had a number of calls to our office – and we are investigating those complaints."

Marlon Kimpson is an attorney with the firm of Motley Rice. A graduate of the University of South Carolina Law School (JD 1999) and Morehouse College (BA 1991), he specializes in cases involving asbestos and mesothelioma, aviation, catastrophic injury and securities and consumer fraud.