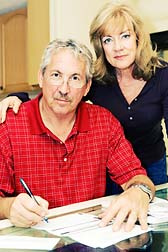 "We phoned and asked to be pulled out of the mutual funds," Elizabeth says. "This is where it got ugly. We phoned at around the end of October or the beginning of November. We went to the bank and they said we needed papers to get the money. On November 12, they sent us the papers and we filled them out and took them back. They said that everything was in order and they would send the check. We finally got the check today [January 13] after my husband threatened them with a lawyer.

More MUTUAL FUNDS News
"We kept calling them [the mutual fund provider] and asking where the check was and we found out that they resubmitted the money in the stock market. They knew we needed that money. We did not give them permission to put that money back in the market. We were behind on the mortgage and they knew that but still they didn't send us the check when we asked for it.

"We got back something like $54,000 and still they withheld $5,000 or $6,000. It was almost 3 months before we got the check. It only took 2 days for us to give them the money [when it was originally invested] but it took 3 months to give us that money back. I think they didn't want that money surrendered.

"It's bad business—I don't care who you are. They almost put us into foreclosure by not sending that money. We've lost over $40,000 and were almost bankrupted by this. We almost lost everything."