Attorney Claude Wyle has been riding motorcycles for 35 years. He and his partners at Choulos, Choulos & Wyle are all motorcycle aficionados. Even the firm's paralegal is a motorcycle enthusiast. With an expertise that few other law firms have, it seemed quite natural for them to focus their personal injury practice on people involved in serious motorbike accidents. "We have ridden on the track, on the dirt, and on the street," says attorney Wyle. "We know how motorcycles work, how they accelerate, what it takes to lean one or turn one over, the difference between different kinds of bikes, how they are going to behave and how an accident unfolds." 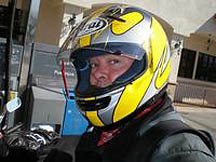 Motorcyclists Unfairly Judged
Choulos, Choulos & Wyle are well known for their superior knowledge in the area and sought out by other lawyers across the US to consult on motorcycle and bicycle accident litigation. Wyle and the firm are currently handling about 30 motorcycle personal injury cases.

In the past, juries harbored a kind of prejudice against motorcyclists, Wyle notes. They considered motorbike riders to be 'risk-takers' who behaved irresponsibly when they got 'behind the handlebars.' "We have been working hard to combat that and I think it has been turning around over the last several years," says Wyle. "The vast majority ride for transportation and because it is economical and they have to commute," and he adds, "most motorcyclists who are injured are hurt through no fault of their own."

The Dangerous Left Turn
According to a well-known study on motorcycling accidents, called the Hurt Study, the major cause of accidents is the left turn. Motorists frequently underestimate the potential for impact from oncoming motorcycles and make dangerous left turns in front of motorcycles. "That is by far the most common case," says Wyle. "I would says 75 percent of the cases we have are 'left turn in front of the bike' cases."

Wyle has handled scores of these kinds of cases. "Invariably, these drivers tell police 'he just came out of nowhere'," says Wyle. However, the facts usually tell a different story. The motorcyclist is usually driving with his headlight on, obeying the speed limit and driving with care. "The driver of the car always tries to use the excuse that the motorcycle was speeding, but when you question them more thoroughly it usually turns out they didn't even see the motorcyclist."


Out of Nowhere is No Excuse
The "out of nowhere" defense doesn't protect motorists from taking responsibility for the crash. "They are supposed to look before they make that turn," says Wyle.

Must Do List for Motorcycle Accidents
The injuries suffered by motorcyclists in accidents are usually more severe than if they had been involved in a car crash. They may need, and indeed be entitled to, substantial financial compensation for their injuries. It is one of the reasons that Wyle urges motorcyclists to seek out a lawyer immediately (and he means immediately) after an accident.

'If a motorcycle is hit by a car, it usually involves very serious injuries," says Wyle. "Most involve at least fractures and some pretty horrible lacerations."
Wyle has a list of must-dos when motorcycle accidents happen.

ï‚§ Don't try to settle with the insurance company yourself. It is too complex
ï‚§ Take pictures of the injuries
ï‚§ Have a friend return to the accident scene and take pictures
ï‚§ Look for skid marks and gouge marks made by bike scraping the pavement
ï‚§ Engage a lawyer who knows about motorcycle crashes

A Note on Bike Gear

More Motorcycle Accident News
You can tell that Wyle understands bike accidents when he starts talking about motorcycle 'leathers'. What the motorcyclist was wearing can send an important message to jurors in these kinds of personal injury cases. "They might feel very differently about you if you were wearing one of those little half beanie helmets, or you are riding around in loafers and a T-shirt, versus riding around in full leathers with padding and armor and motorcycle boots," says Wyle.

Claude Wyle received his undergraduate degree, with honors, from the University of California. He obtained his J.D. from the University of California, Hastings College of the Law, where he was on the Law Review titled Comment, and obtained the highest grade in his class for trial practice. He also studied at the Institute of International and Comparative Law in Oxford, England.