Quality control seems to have gone the way of the dinosaur, while the word 'recall' has become part of our everyday vocabulary. How did we get here? And whatever happened to reliability? Especially when it comes to medical products? Take for example, Medtronic Implantable Cardioverter Defibrillators.

In yet another example of implantable defibrillators not being up for the job, Medtronic of Fridley, Minnesota put out an alert to the medical community over its family of Medtronic Implantable Cardioverter Defibrillators (ICD) and CRT-D devices due to faulty batteries. 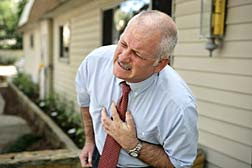 That was in February of 2005, and so far 13,000 patients have had the ICD surgically removed. An additional 16,000 were replaced from a recall prior to 2003. In its statement of two years ago, Medtronic offered to replace the potentially defective device at no cost to the patient (a $20,000 value), plus a provision for covering unnamed additional expenses, but made no mention of shelling out for the cost of the surgery.

It gives pause to suggest that there may be those opting to live with a potentially faulty, life-saving device due to an inability to pay.

It also leaves you wondering, given all the reports in the news about faulty implantable defibrillators, just what it is that your doctor is recommending be placed inside of you?

The Medtronic web site opens, among other messages, with an image of an implantable defibrillator and the words, 'Peace of Mind'.

The issue in question is not so much faulty implants, but the batteries which power them. The 87,000 ICDs identified in the product alert of 2005 were for units containing batteries manufactured prior to 2003.

And the stereotype suggesting that seniors and the elderly are the only ones walking around with these things is exactly that - a stereotype. While most ICDs are associated predominately with the senior population, they are also used by people of all ages with heart issues.

In 2005 Adam Kloose was in gym class at Lodi High School when his heart stopped. His Medtronic ICD failed, and Kloose is suing Medtronic and two related companies, as well as the Lodi Unified High School District for the brain damage he suffered as a result of the failure.

Lest you suspect that Kloose was running the gym class as a teacher, in reality the Stockton, California resident was a high school student with a heart problem.

It's apparent that Medtronic, one of the largest suppliers of medical devices in the world, is bracing for some stormy weather. At last report there were nearly 1000 Federal and State court cases pending in addition to five class action personal injury suits in Canada. Last fall, Medtronic attempted to have several hundred cases dismissed on grounds that FDA approval of the defibrillators pre-empted the lawsuits. That motion was denied. Medtronic was expected to appeal.

It also appears that public awareness to ICD problems in general - including defective units distributed by competitors - have succeeded in slowing sales, to the point where Medtronic is expected to reduce the employee base in its cardiac rhythm management division by 550 persons, through layoffs, buyouts and early retirements.

However, don't cry for Medtronic just yet.

As a global player in cardiac medical devices, Medtronic's sales are in the billions of dollars. Worldwide net sales of implantable defibrillators through its Cardiac Rhythm Disease Management division for the 3 and 9 months ending January 2007 were $1.291 billion and $3.904 billion respectively. Medtronic distributes medical products and services to roughly 5 million patients each year, generating upwards of $9 billion in sales.

If you have, or suspect you have a problem with your Medtronic ICD, discuss the matter with your doctor or surgeon and determine your options. You also may wish to seek legal advice, in the event you may be entitled to a settlement.