Physicians and senate investigators are calling for a major overhaul in the drug regulation process at the US Food and Drug Administration, based on the recent scandal involving approvals for the antibiotic Ketek.

Ketek has been linked to liver damage in dozens of cases, some of which resulted in liver failure and death. Earlier this year federal regulators limited the approved uses for Ketek and requested new safety warnings for the drug.

But some critics say the FDA waited far too long, charging that the agency rushed to approve the drug, and that it silenced FDA researchers who brought up the risks years ago.

Ketek was Twice Rejected
Certain applications for the antibiotic Ketek were rejected twice, in 2001 and 2003, before FDA management approved the drug on April 1, 2004, based on what a Senate 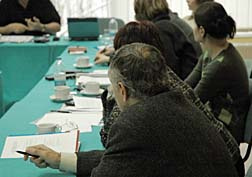 committee has described as fraudulent studies, and over the objections of the agency's own scientists.

Since the Bush administration first took office, critics charge, there have been disturbing changes at the FDA, where the agency has overruled the findings of its own research scientists. In recent years, more and more funding to the FDA has been moved from the tax dollars to pharmaceutical company fees, known as "user fees."

"It looks to me like Big Pharma is pulling the strings now," states Richard D., a health care advocate who has closely followed the Ketek saga.

Drug Not Needed
In February 2007, officials at the U.S. Food and Drug Administration (FDA) announced that Ketek could no longer be used to treat sinus infection and exacerbations of chronic bronchitis, but that it could still be used to treat community-acquired pneumonia. A black box warning was also added, the agency's highest warning level.

But many physicians wonder why the drug was ever approved for these uses, when safer alternatives were already available.

"This was not a drug that anybody thought was necessary in terms of public health," Dr. David Ross, a former FDA official, told the St. Petersburg Times. "But it was important for the company financially."

An FDA memorandum by Dr. Rosemary Johann-Liang, who worked in the Office of Drug Safety, expressed concern that the risks of the drug outweighed its usefulness in treating conditions for which many other, safer drugs are available. In the memorandum, made public in the New York Times, Dr. Johann-Lang asked: "How does one justify balancing the risk of fatal liver failure against one day less of ear pain?"

Both physicians claim that they were instructed by their bosses not to discuss their concerns with anyone outside of the FDA.

Did the FDA Stonewall Senator?
Senator Charges Grassly (R-Iowa) has led the charge against Big Pharma's close ties to the FDA. In this effort, he has been arguably stonewalled. "The FDA refused to allow me to question an internal investigator who is leading an inquiry into alleged fraud involved with clinical trials for the antibiotic Ketek," Grassley wrote in a recent op-ed.

"The FDA approved Ketek for the marketplace using falsified clinical data," the Senator continued. "Now the drug is linked to adverse effects, including abnormal liver function."

In fact, according to a review by the Senate Finance Committee, between July 2005 and September 2005 there were two deaths, 35 liver adverse reactions, 44 cardiac events, and 80 "visual events" reported in Ketek patients.

FDA Ombudsman Needs to Act
According to the FDA, attempts are now being made through its Ombudsman's office to resolve "disputes" among drug-safety reviewers at the agency. In November 2004, they developed a pilot program Documenting Differing Professional Opinions and Dispute Resolution "where reviewers are provided a forum to discuss and resolve differing professional opinions."

More News
But, according to the FDA's own website, the Center "did not review any reviewer disputes under this pilot program in 2005 or 2006, although there have been several public complaints by reviewers on topics such as the approval of the antibacterial drug Ketek, and general drug safety review procedures."

Until the FDA acts to protect its researchers from intimidation, some physicians are less than confident that drug companies will "do the right thing" when it comes to public safety.