Performance filings with the US Securities and Exchange Commission (SEC) are informative in more ways than one, as documents often reveal the state of a corporation’s liability and litigation threats. Such is the case with C.R. Bard Inc. (C.R. Bard), a noted manufacturer of inferior vena cava filters that has been targeted with a rash of IVC Filter lawsuits. 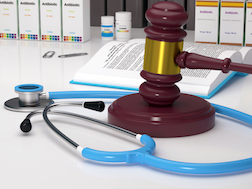 To that end the manufacturer of the Bard G2 IVC filter noted in its most recent Form 10-Q Report for the period ending September 30th that it was facing 1,055 lawsuits in various federal and state jurisdictions.

Bard IVC filter lawsuits came under scrutiny of the Judicial Panel for Multi-District Litigation in August of last year, which proceeded to move over 1,000 lawsuits into the Bard MDL. It has been reported that another 50 cases are currently pending in various state courts, with another 40 claims which thus far have been threatened for litigation, but as of the close of September had not yet been filed.

C.R. Bard is one of several manufacturers dealing with allegations of defective products, after scores of inferior vena cava filter patients have alleged injury after struts inherent to the design of the removable filters have broken free, and have migrated along the inferior vena cava artery to the heart and other organs. The IVC filter itself has, in some cases, migrated away from the insertion point and caused injury to the patient, or put the patient within imminent danger should the filter, or any of its components, reach the heart or lungs.

Allegations persist that C.R. Bard allowed for the allegedly troubled Bard Recovery IVC filter to remain on the market for a period of years – without an IVC filter recall – before introducing its successor, the Bard G2 IVC filter.

The Bard G2 filter is alleged to hold little improvement over the model it was intended to replace. A further complication is that, in a majority of cases, filters designed to be retrieved once the danger of a blood clot has passed, are not retrieved successfully. The US Food and Drug Administration (FDA) advocates a small window for when filters should be retrieved, noting that risk for complication increases the longer an IVC filter – designed and manufactured to be retrieved – remains in the patient.

More IVC FILTER News
Lawsuits are also pending in Canada, according to the C.R. Bard SEC filing released October 26. Three class action IVC filter lawsuits were filed in three separate provinces in 2016: in the province of Quebec in March, followed by a class action for Ontario filed in April and a third filed in British Columbia in May of this year.

C.R. Bard signaled in its quarterly filing that it intends to vigorously defend its products against cases that fail to settle. The company also noted that it could not give any assurances that resolution of such claims would not necessarily pose adverse effects on C.R. Bard’s business, results of its operations, the financial health of the company and / or liquidity of C.R. Bard.

C.R. Bard cases are consolidated for pre-trial proceedings in MDL 2641 in US District Court for the District of Arizona. Bellwether trials are expected sometime in 2017.