Hope For Patients With IVC Filter?

A team of radiologists say they have developed a way to remove inferior vena cava filters that is 100 percent successful, even in removing filters that were previously considered irretrievable. The news might provide hope to patients who worry they are stuck with a temporary filter that is causing permanent damage, similar to claims made in IVC filter side effects lawsuits. 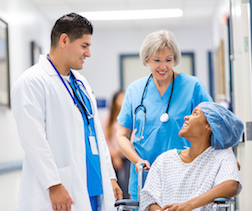 The IVC filter retrieval claims come from interventional radiologists at Rush University Medical Center, whose work was published in November 2016 in Journal of Vascular and Interventional Radiology. Osman Ahmed, MD, primary author and interventional radiologist at Rush University Medical Center, said the team uses both standard retrieval methods and advanced tools to remove any type of filter. Included in the techniques is a method of snaring the filter and covering it to trap it and prevent it from breaking.

"Thanks to these methods, the Rush team has achieved a 100 percent retrieval rate over the past five years, including difficult-to-remove filters from patients who have been referred to Rush from other hospitals," a news release from Rush Medical Center states. While some patients can undergo retrieval under conscious sedation, those who require advanced retrieval might require general anesthetic.

IVC filters are implanted in the inferior vena cava of patients who cannot take anticoagulant medications to reduce the risk of blood clots traveling to the heart and lungs. Some filters, however, are temporary but recent studies suggest they are left in longer than they should be, which can increase the risk of a serious complication, including having the device break and perforate internal organs. In such cases, some doctors may not remove the filter for fear removal could cause more harm than good.

"Unfortunately, filters are not always removed once the initial threat of a blood clot traveling to the heart and lungs subsides, because there hasn't previously been awareness of the potential risks of leaving them in," said Sreekumar Madassery, MD, interventional radiologist at Rush University Medical Center.

Patients who have suffered IVC filter complications have filed lawsuits against the makers of the IVC filters, alleging they broke or moved from position and caused serious, life-threatening complications. Two different companies face litigation that has been consolidated for pretrial proceedings. In the Bard multidistrict litigation (MDL 2641) there were 1,112 actions consolidated as of November 15, 2016. In the Cook multidistrict litigation (MDL 2570), there were 1,176 lawsuits consolidated. Bellwether trials for the Cook MDL are currently scheduled for 2017.

Lawsuits against both companies allege they knew or should have known about the risks associated with their filters.