IVC Filter Bellwether Lawsuits Still a Year Away, Cases Could Increase in Meantime

We’re about a year out from the first scheduled bellwether trials involving inferior vena cava filters, known popularly as the IVC filter. It’s a voluminous file, given that Baby Boomers are aging and moving into their retirement years, together with the various health complications that accompany the majority of Americans as they move through retirement. 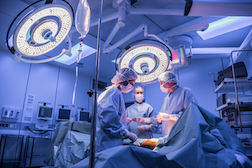 With Americans continuing to age, and with IVC filters continuing to be available on the market, it is presumed that multidistrict litigation that now houses about a thousand cases against C.R. Bard alone will grow exponentially over time.

The inferior vena cava filter has experienced a checkered existence since the devices were first approved. For patients with serious blood clot issues, or for those who can’t tolerate blood thinners, the IVC filter was designed primarily as a temporary response to blood clot risk. The small device is surgically implanted into the inferior vena cava – the primary arterial pathway moving blood up from the lower extremities – and is designed to entrap migrating blood clots, preventing the clots from reaching the heart and lungs.

Various manufacturers have brought devices to market, including Cook Medical and C.R. Bard, the manufacturer of the Bard IVC filter – and in theory the devices are sound. For most IVC filter patients, complication is not an issue.

For others, however, complications have been serious, if not deadly. Lisa Davis is identified as one IVC filter lawsuit plaintiff who was provided with a Bard G2 filter in 2006. About two years later the small, spider-like filter suffered structural failure and a fragment from the filter migrated along the inferior vena cava to her heart.

Davis would have needed open heart surgery to have the fragment removed. She declined the procedure. The end result for the plaintiff is that she will be on blood thinners for the remainder of her lifetime. She must also deal emotionally with the fragment continuing to reside in her body.


“IVC filters should be removed between the 29th and 54th day after implantation.”

The Bard G2 filter that Davis received in 2006 was an update to a previous device allegedly plagued with problems. Previous media reports have suggested that C.R. Bard waited three years before responding to reports of problems with the predecessor to the G2. Plaintiffs in IVC filter lawsuits allege C.R. Bard failed to warn consumers and health care professionals as problems surfaced, and failed to initiate an IVC filter recall. The Bard G2 IVC filter, when it was finally released, was touted as an improvement to the earlier, allegedly troubled Bard IVC filter.

However, plaintiffs allege the G2 has not proven to be a worthy improvement to the original Bard IVC filter, as Davis can attest. Her lawsuit asserts that C.R. Bard failed to warn her doctor as to the risks inherent to the G2, and that C.R. Bard misrepresented the Bard G2 filter as safe and effective.

The IVC filter is envisioned, primarily, as a temporary device deployed when blood thinners either can’t be tolerated, or in response to a risk for blood clot that is so paramount, anticoagulants would prove an insufficient response to that risk. IVC filters have small, wire-like struts designed to hold the filter in place at the point of insertion and to entrap – and hold a blood clot, preventing it from migrating towards certain disaster.

Due to previous reports of failures, together with the risk for a series of blood clots to build and collect at the IVC filter with the potential for restricting blood flow along the inferior vena cava, IVC filters are viewed as a temporary response, and designed to be removed after a short period of time.

It was August 9, 2010 when The US Food and Drug Administration (FDA) wrote that “since 2005, the FDA has received 921 device adverse event reports involving IVC filters, of which 328 involved device migration, 146 involved embolizations (detachment of device components), 70 involved perforation of the IVC, and 56 involved filter fracture. Some of these events led to adverse clinical outcomes in patients. These types of events may be related to a retrievable filter remaining in the body for long periods of time, beyond the time when the risk of pulmonary embolism (PE) has subsided.”

A little under four years later, on May 6 of 2014 the FDA returned to the issue with a recommendation that retrievable IVC filters be removed once the risk for pulmonary embolism has subsided.

“The FDA has received reports of adverse events and product problems associated with IVC filters. Types of reports include device migration, filter fracture, embolization (movement of the entire filter or fracture fragments to the heart or lungs), perforation of the IVC, and difficulty removing the device. Some of these events led to adverse clinical outcomes. These types of events may be related to how long the filter has been implanted. Other known long-term risks associated with IVC filters include lower limb deep vein thrombosis and IVC occlusion. For patients with retrievable filters, some complications may be avoided if the filter can be removed once the risk of pulmonary embolism has subsided.

“The FDA is concerned that retrievable IVC filters, when placed for a short-term risk of pulmonary embolism, are not always removed once the risk subsides.”

In other words, the longest a retrievable IVC filter should remain in the human body is just under two months. For the majority, this doesn’t appear to be possible.

IVC filter lawsuits involving C.R. Bard alone are centralized within multidistrict litigation in US District Court for the District of Arizona (MDL 2641).