"I believe that hospital infections are a growing problem in our area and I think hospital staff need to use proper procedures to clean up the mess," says Karen, whose husband contracted a staph (staphylococcus aureus) infection after surgery. 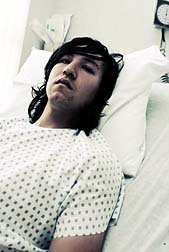 "My husband had back surgery last July 1, and three weeks later his incision started draining," says Karen (real name withheld). "The doctors opened the wound again and drained the staph infection for a week before he was able to come home. They gave him antibiotics and a pic line [peripherally inserted central catheter]. He was on the pic line for six weeks, but just two days after it was removed, he developed a fever.

"That was on September 28. We have been back and forth to the hospital ever since, trying to fight this infection.

"The doctors have changed his medication a few times but nothing seems to work. He had to get the incision opened and drained a second time at the same hospital. We aren't going back to that hospital.

"This course of antibiotics runs out on January 12 and then he will have to go back to the Oklahoma Spine Center to try and figure out what is going on. He has pain in his hip and they don't know whether it is due to the infection or not.

"This staph infection has become a nightmare. During his first time in hospital, right after the surgery, there were three other people on the same floor at the same time—their incisions had been opened up and the infection drained, just like him. I don't think it is just this hospital, it is rampant nationwide.

"Interestingly, the first time the doctors opened him up, they cultured one of the screws and it came back positive for staph. One of the doctors I talked with told me that this hardware should have been removed when they knew he was infected with the staph.

"I would hate for someone else to have to go through this. It makes me wonder if the medical devices are at fault—if they haven't been properly sterilized before getting to the hospital—or if the medical staff are doing so many surgeries that they don't have time to properly clean up. I don't know where staph and MRSA infections come from but I do know that my husband is very sick. He has lost about 80 pounds since the surgery. And these antibiotics really mess up the natural flora in your stomach, so he is also dealing with that.

More HOSPITAL INFECTION News
"My husband is in the hospital right now. I'm just getting him some lunch and I will be staying with him for a few hours until I have to get back to work. I have no idea how long he will be in hospital for this time—at least until January 12—and then they are going to send him somewhere else, likely Oklahoma City, where he can get better help. We live 75 miles away from the city so that is going to be another hardship.

"I'm angry—this should never have happened. I asked the doctor if it was anything we did and he said an emphatic NO. But he didn't blame it on the hospital either.

"I wish there was a place to go online to see ratings of hospitals to see how many infections they have reported. Hospitals just tell you about their great facilities and good doctors, and not a word about hospital infections. "

Some states, such as RID for New York, have online sites that post lists of safe hospitals. Unfortunately, there is still no public reporting of specific hospital infection rates for individual hospitals.

If you have suffered losses in this case, please send your complaint to a lawyer who will review your possible [Hospital Infection Lawsuit] at no cost or obligation.
Request Legal Help Now

Posted by
Mahala Wright
on September 15, 2015
I am facing possible knee surgery. In 2011 I had surgery preformed on my left shoulder. As a result 0f that I HAD STPH I
NFECTION. I went through all the frustation of the pic etc. .I was toldwould not be a good canidate for any future surgeries.Although the infection was cleared .How true is this?
Posted by
david mc
on October 2, 2014
It sure seems like a lot of people are getting staph infections from hardware installed during back surgery. How come no lawyers have initiated class action lawsuits on behalf of the patients who have contracted the infection. I got a staph infection and have endured two surgeries, two six-week stays in the hospital along with having to take antibiotics the rest of my life. I was not made aware of the degree of risk at all.
Posted by
steven Abbas
on January 22, 2012
I am so sorry to hear your story! I am going through a similar nightmare right now. I BE had two surgeries. The second one I was essentially swooped away Anthe evening of my follow up visit of the first surgery I was so doped up I barely remember going to the hospital that night. And after that survey im still more screwed up worse than before any surgeries. So now I am going to mayo clinic and they said my staff was introduced in the second surgery. And I have to have a this surgery feb 2 and its risky because first surgeon ground of so much of my disk its going to extremely difficult to have enough room to put the bolts and brackets in.
Now the doctors wont say negative things against other doctors. But the mayo clinic surgeon told me I was screwed up from the first surgeon. So after I get somewhat healed up from the third surgery I have to try to legally do something about the first surgeon. Because I may not ever be able to work.
I was supposed to be back to work in two weeks. Im on three months
. With no pay! !! It really sucks. Well you take care. And the best of luck!

Posted by
Paula Bain
on June 4, 2011
I went in the Hospital Sept 29, 2009 for an over night surgery. It turned into Staph infection which resulted in a 7 day stay in intensive care with Adult Repiratory Distress Syndrome (ARDS) Which quiet often results in death. I was admitted two more times after the inital hospitalization with my final release date Dec 2, 2009. I spent almost 3 months in the hospital with more surgeries. Being a widow living alone know one was caring for my finances! I lost my health insurance while in the hospital for non-payment. I was so sick for 6 months after my final release that I failed to notice my insurance issue. I have not been able to get a replacement policy and am having to do without. I don't go to the Doctor as I should becuase I don't have the money to pay the co-pay! Today I found out another family member had surgery at the same hospital and now has a severe case of Staph. This particular hospital has had a major problem with staph infections since 2001. I am terrified of needing surgery again at this hospital and getting another staph infection. The only alternative is to go to a hospital 1 1/2 hours away which for me and others is impossible due to disability (sleeping disorder) and unable to drive and/or no one else to transport to this hospital and now no Plan C health policy!! Is it too late to sue this medical center?