David is one of over two million people who acquire hospital infections each year (according to the US Centers for Disease Control and Prevention). An investigation conducted by the hospital determined that David's MRSA infection originated from a staple used during his back surgery. The massive amount of antibiotics he took to treat the infection may have also caused him to suffer a stroke, David says. 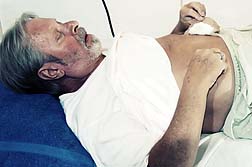 It gets worse: "I was billed $8,500 for three days in the hospital to treat the infection, and that is obscene," says David. The hospital recently apologized and offered him $3000 under the condition that he sign a non-disclosure agreement. However, that's not good enough, says David, whose insurance covered the medical bills. Reimbursement is not his only objective—he also wants to ensure that patient safety is improved. Makers of medical devices and the medical community must be held accountable for their mistakes.

David no longer suffers from his back problem, but he has developed severe complications from the hospital infection. "During the recovery time of the infection, I suffered from vertigo," says David. "Because of the vertigo and a large loss of strength in my left side, my doctor ordered a CT scan of my brain. Based on the results, a radiologist report indicated that I had experienced a possible stroke brought on by the excessive amount of antibiotics needed to treat the infection."

David says that after his surgery, he went to a rehab center, where the major infection in the incision area went unnoticed by the nursing staff. The discharge from the wound increased daily, yet he was sent home. "My entire back and the bed were soaked," he recalls. David's primary surgeon took a look at the wound and told him to go back to hospital for another surgery ASAP.

"I had a pic catheter inserted and was put on a strong antibiotic only used for MRSA infections," says David. "They watched me overnight to see if my white blood cell count came up. After three days they sent me home. I had to take the antibiotic and change bandages for 30 days. Once a week a nurse came over and checked my white blood count.

More HOSPITAL INFECTION News
"By the time the wound had closed and formed a scab there was no more discharge. But now my lower back has hard skin where the infection was and it is more painful than before. I did some research—when scarring occurs, scar tissue grows around nerve endings and there is no cure. I've lost confidence in all these doctors. My surgeon said I would recover one day, but I'm still hurting.

"I believe a large extent of the damage was caused by…neglect and failure to take proper medical action once the infection became noticeable. I feel that the hospital must take responsibility for the poor care given to me. At this point I am willing to negotiate a private settlement over the issue at hand without taking legal action. However, if an agreement cannot be reached, I plan on pursuing all legal remedies for this matter."

If you have suffered losses in this case, please send your complaint to a lawyer who will review your possible [Hospital Infection Lawsuit] at no cost or obligation.
Request Legal Help Now

Posted by
Sam perez
on September 12, 2014
after the surgery i had in dec2013 i started hurting THEY HAD TO REPAIR MY SPINAL FUSJIONS AGAIN 3 MONTHS LATER COMPLAINED AGAIN THE PAIN WAS STILL THHER MY WHITE BOOLD COUNT SHOULD AN IFECTION SO HE SENT ME TO THE HOSPITAL TO DO A CT SCAN WITH TRSCHERS THQT DAY i TEXED HIM AND TOLD HIM IT WQAS GETTING WORSE i CAM TO THE OFFICE AND WHEN HE SAY MY INSIONS THEY DID IT HAD A BIG BOIL IT POPIN HIS OFFICE HE SCHUDLE MEE FOR THE HOPITAL ASAP NEXT DAY SURGERY HE HAD TO CLEAQN AND REMOVE FUSION IN MY BACK SAID THEY WERE INFECTED AND INSTALLED NEW ONES NEXT DAY HAD TO GO BACK AGAIN IN SURGERY THE NEW SCWREWS HE PUT IN WE NOW HITING A NERVE NOW I AM ON VANCO iv AT HOME