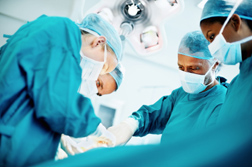 The lawsuit claims that the da Vinci robot caused burns to an artery and intestines when his daughter was having a hysterectomy in a Bronx hospital in August 2010. She died two weeks later. According to the complaint, the robot is defective: design flaws include un-insulated surgical arms and use of electrical current that can jump to healthy internal organs and tissue. It also claims that physicians are not properly trained on the device, and that Intuitive Surgery Inc., the manufacturer of the robot, has failed to run randomized tests as to complications with its robot; and it failed to adequately research the device or warn patients and the medical community that its use comes with substantial risk of complications and injuries.

The father, Mr. McCalla, further alleges—in another lawsuit—that Intuitive Surgery has suppressed reports of complications, and has oversold the merits of its da Vinci robot to hospitals considering buying it.

(This tragic death isn't the only incident involving the robot. More hospital burns have been reported and several other complications occurred at Wentworth-Douglass Hospital in Dover, New Hampshire, where doctors used a da Vinci robot, including cut bladders, cut ureters and possibly a lacerated esophagus.)


The Reviews in Urology Journal reported that a surgeon must perform up to 200 cases to be proficient with robotic surgery and that patients often experience inferior outcomes while their doctors are in the "learning curve." Further, some surgeons don't have patient volume sufficient to master the technique. But the da Vinci robot, which costs about $2 million to purchase and comes with a hefty annual maintenance cost, is reportedly used by hospitals to gain a "competitive edge," and surgeons may be pressured into using the robot before they are adequately trained.

According to the FDA's Manufacturer and User Facility Device Experience Database - (MAUDE), which is a public database of voluntary reports of adverse events involving medical devices, adverse events with the da Vinci robot are not new. As well, medical journals have reported a number of complications with the da Vinci robot in different types of procedures, such as prostate surgery and other gynecologic surgery. Most injuries involve burns and tears to intestines, blood vessels, uterus and vaginal cuff dehiscence (a complication of total hysterectomy).

And a number of medical groups, including the Kaiser Foundation and the American College of Obstetricians and Gynecologists, have questioned the use of robotic surgery.

The only maker of robots in the US, Intuitive Surgery, Inc., which is based in Sunnyvale, California, reported recent annual earnings of more than $1.75 billion and its balance sheet showed more than $3 billion in assets.

Posted by
Merle Waterman
on January 8, 2013
My Husband was a healthy viral man in his late 60s.
With no symptoms but on the results of PSA tests he was diagnosed with prostate cancer. Biopsy showed in all 4 quadrants of the prostate. The Dr. Said there was only an 8 percent chance of any problems with incontinence or loss of sexual performance after the Davinci surgery.
After the surgery he is now incontinent and unable to achieve erection. He is still trying physical therapy but ther has been no improvement since the surgery in 2008.