A healthcare whistleblower has won $4.5 million after filing a complaint about Medicaid fraud. A federal judge in Virginia made the order against an in-home therapy company, finding the company and its owner submitted false Medicaid claims. 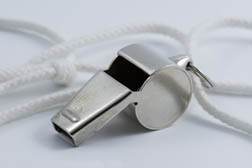 According to reports, Tamika Nottingham filed the lawsuit in 2011 against Delores Freeman Thomas and New Season Clinical Services LLC. The lawsuit alleged Thomas falsely received $1.5 million from Medicaid by submitting false documents related to in-home therapy and mental health support from January 2010 to November 2011. The government alleged as many as 2,669 false claims were filed by the defendants, a violation of the False Claims Act.

In 2014, Thomas was sentenced to 15 months in prison after pleading guilty to one count of healthcare fraud. She was also handed a $25,000 fine and ordered to pay back the $1.5 million. Because Thomas was convicted, US Magistrate Judge Douglas E. Miller ruled she could not contest liability for damages.

Meanwhile, a whistleblower lawsuit filed against Sanofi is moving forward, with the whistleblower - former paralegal Diane Ponte - alleging she knew of instances in which Sanofi lawyers purposely destroyed documents instead of turning them over to plaintiffs in lawsuits. Ponte’s lawsuit initially alleged Sanofi schemed to pay $30 million in kickbacks for promotion of diabetes medication.

More HEALTHCARE FRAUD News
According to CNBC (11/20/15), Sanofi said it will not comment on pending litigation, but initially following the filing of the suit referred to Ponte as a disgruntled former employee. Ponte also alleged she was fired in retaliation for notifying executives at Sanofi of the alleged kickback scheme. She reportedly became aware of the kickback scheme while reviewing nine contracts worth a total of $34 million. Although she was asked to review the contracts, they had actually been executed months before her review.

Ponte’s lawsuit, filed in 2014, alleges Sanofi’s scheme involved inducing customers to prescribe their drugs and/or switch from selling similar drugs made by other companies to selling Sanofi’s medications.

This isn’t the first time Sanofi has faced claims of illegal kickbacks. In 2012, Sanofi agreed to pay $109 million to settle allegations of offering free units of a drug to encourage doctors to prescribe the medication.

Posted by
Anita williams
on December 13, 2015
September 21 2013 I was placed on PRN status after the company I worked for received 20000 dollar fine for negligence.A nurse with 30 years experience and I could not find a job.....state Texas fined the facility and I lost my job..they never called me to work and still advertise for RNs.....