You've often heard the phrase, "he's got more brains than he knows what to do with..." In the town of Austin, Minnesota that phrase has taken on new meaning, thanks to a bizarre health issue that appeared to be affecting certain employees of a meat processing plant there.

In fact, as truth is stranger than fiction, you would be forgiven if this sounds more like a script for an investigative medical drama on television than the real-life trials of hapless line workers just doing their jobs, as gross as jobs sometimes are, in meat packing plants.

However, beyond the mystery of what made some individuals very ill, is the responsibility of employers to protect their workers from risk, and to be pro-active by anticipating health hazards and stemming them before they become a problem. 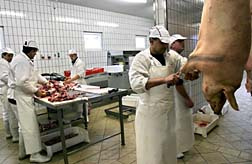 The story centers on Quality Pork Processors, a meatpacking and processing plant in Austin. Many of the workers are Hispanic, at wage scales that start in the $11 to $12 per hour range. Union reps say the plant is clean and the workers treated well, with good benefits.

These guys are major players, processing thousands of hogs per day in an assembly-line environment. The pork carcass is sent along the conveyor belt and various line workers are mandated to perform various tasks on a certain area of the carcass.

We get a little specific here, so if you are prone to squeamishness, our apologies. Don't say you weren't warned.

But honest, it's a fascinating story, and it all centers around the harvesting of pig brains.

No one would be surprised to learn that the food industry is just as competitive, and as efficient as other industries must be to compete in the global marketplace. Even from the lowly pig, nothing is wasted. While we wouldn't begin to suggest what goes into the making of a typical pork sausage, we will tell you that there is little likelihood that pig brains would be one of the ingredients, as they are too valuable, and much-in-demand as a delicacy overseas. There are various populations in China and Korea half-a-world away from us that like to stir-fry them up, and domestic fans in some parts of the American south that profess a hankering for them, scrambled up with their eggs.

To wit, the process of harvesting a pig brain is akin to scrambling an egg, in the context of the way in which a pig brain is harvested: a process called 'blowing the brains.' It's not the only way to do it, mind you. But it's the method once preferred by Quality Pork, and it is highly efficient.

A tube is inserted by the brain blower (the worker) into the back of the severed pig's head, where the vertebrae once connected with the skull. Then a concentrated blast of compressed air directed into the cranium reduces the brain matter to a soft, almost liquefied mass that sluices out of the same opening at the back of the head, back towards the worker.

Most of the harvested brain is scooped up for proper processing and packaging, but a goodly amount of over spray, to use an automotive term, winds up on the aprons and in some cases, the bare arms of the hapless worker, working the head table. The so-called head table is protected by Plexiglas panels under which the severed hog's heads ride the conveyor. However, it is not a contained environment and inevitably the brain matter finds its way to workers, who wear gloves, hard hats and goggles, but were not equipped with masks or any kind of external breathing apparatus.

And therein, it seems, lay the problem. The blast of compressed air was not only freeing the brains from the cranial cavity, it was also serving to cause aerosolization of brain tissue.

The workers breathing this stuff in were getting sick.

The affected individuals were reporting a highly unusual basket of symptoms such as fatigue, pain, weakness, numbness and tingling in the legs and feet.

It took awhile, but it was finally discovered that the ingestion, either through the inhalation of atomized pig brains or the absorption of splatter through exposed skin, was having a dramatic, almost eerie effect on humans—complicated by the belief that there are similarities between the cell structure of humans, and hogs. Given that similarity, the body's natural immune system will quite naturally attack any foreign nasties in the body.

However, when that particular nasty is similar in nature to your own body's cell structure, the immune system becomes confused and attacks not only the foreign body you want to get rid of, but also your own.

"That's the beauty and the beast of the immune system," Dr. Michael Osterholm, a professor of public health at the University of Minnesota, said in comments appearing in the New York Times. "It's so efficient at keeping foreign objects away, but anytime there's a close match it turns against us, too."

While anatomically, pigs are a lot like humans, it is not clear how close a biochemical match there is between pig brain and human nerve tissue.

Quality Meat Packers, which processes an astounding 19,000 swine per day, has since abandoned the process of using compressed air to harvest brains, as have others, using other methods proving less of a risk to workers.

Epidemiologists contacted 25 swine slaughterhouses in the U.S. and only two others were using compressed air to harvest brains. One, located in Nebraska, had reported no cases of the strange malady affecting workers at the head table at Quality. However, Indiana Packers on Delphi, Indiana did report several possible cases, currently under investigation.

Like Quality, the other two processing plants have switched away from compressed air, and workers now have better protection. Quality is reported to have halted using compressed air for brain harvesting the moment it realized the process could pose a problem.

Still, one has to wonder if there are other plants using compressed air for brain harvesting.

And beyond that, it might behoove a processing plant owner to go the extra mile in protecting any, and all workers from potential hazards—especially anything a worker could inadvertently inhale, ingest or absorb.