Like many of her partners at Strindberg and Scholnick, LLC, became a Utahan by choice, moving here from her native Illinois in 1995 to clerk under Judge Gregory K. Orme at the Utah Court of Appeals. "We started the firm in January 2002," she says. "We do all sorts of employment law and labor law, everything involving labor except workers' compensation, although the La-Z-Boy case is sort of that." 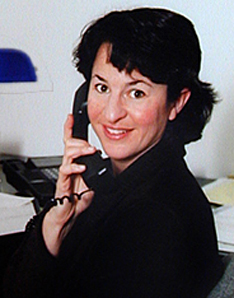 Scholnick describes the La-Z-Boy case, Touchard v La-Z-Boy, first filed in 2004, as "sort of monumental for Utah workers in a bunch of ways. It's a wrongful termination case; most employees are protected from retaliation under state statute—they can't be fired, treated badly or demoted for using workers' compensation. In Utah, we didn't have any such protections under state statute, and up until La-Z-Boy there hadn't been a tort case establishing a protection from retaliation under common law."

The case centers around wrongful termination of workers at the La-Z-Boy recliner plant in Tremonton, Utah, who had filed for workers' compensation for work-related injuries. Scholnick says, "The plant had 1000 employees and almost all of them had had some sort of injury—the plant was not very mechanized, so there was a lot of heavy lifting of mattresses and so on, a lot of repetitive stapling and sewing, and a lot of repetitive stress injuries.

"La-Z-Boy was self insured, so it wasn't part of the state workers' compensation pool; they paid out of their own pocket. So they had a financial incentive to dissuade people from using those benefits. We knew it would be a class action, that was our intention, what we didn't want to do was invest a lot of time and money in the case and win at trial, then have La-Z-Boy appeal on grounds of no underlying cause.

"We wanted to resolve the issue of common law protection at the outset, so we basically said to La-Z-Boy, 'Don't you think we should resolve this early?'. So they filed to dismiss the claim; their motion to dismiss was heard by the federal District Court judge, who said that there was good chance for cause of action and that she'd ask the Utah Supreme Court for an advisory opinion. So it was sent over, and the Utah Supreme Court gave its opinion to the federal court in November 2006, establishing that all Utah workers cannot been fired for filing for or using workers' compensation benefits. This established the common law interpretation.

Scholnick filed for class certification on April 15. She says that the class will include all past La-Z-Boy employees who have been fired or constructively discharged: "We've established in discovery that it could be as many as 600 people.

"There are a few different aspects to the remedy we're seeking—the first is to reopen the workers' compensation claims for the people who were denied treatment, benefits, or payouts because they were discouraged or terminated. That's an equitable remedy that will require re-examination of the claims, and the judge could handle it in different ways.

This is not the first wrongful termination case that Scholnick has handled, she says, "but to have such a blatant pattern and practice is unusual; it brings to light this bad act on the part of the employer. Some people were terminated for filing, others were dissuaded from filing, then when they had repeat injuries, they'd sometimes be fired.

"Sometimes La-Z-Boy had a 120-day return to work after injury policy. Even if they did get workers' compensation, the company would stall on treatments or put them on a very punitive alternate duty plan that would violate their work restrictions—if someone suffered from repetitive stress injuries, they'd assign them to jobs requiring fine motor skills, for example.

"Sometimes they made them come back to work the same day they were operated on, often under high narcotic pain medication. Other times they refused to transfer senior employees to other jobs that they could do; they just put them back on jobs they knew they couldn't do, so the employee would quit, or if an employee came back after costing La-Z-Boy money in workers' compensation, if they needed it again, they would fire them for bogus reasons—lying, faking a time card, etc.—to get rid of them. It's unbelievable."

Speaking of her own and her partners' motivation, Scholnick says, "I think we all got into law for similar reasons, and that's to use the law to make life better for average employees who are trying to put food on the table. It's kind of a moral reason to become a lawyer.

"That's especially true in Utah, where employers think they can get away with this kind of thing; making them accountable sort of motivates us. These La-Z-Boy employees are great people, some of them are injured for life and La-Z-Boy has never faced up to their responsibility, so that's what we're trying to make them accountable for."

Lauren Scholnick graduated from Stanford University in 1988 and received her JD from the University of Illinois College of Law in 1995. A founding member of Strindberg and Scholnick, LLC, she currently serves as on the Utah Legal Services' Board of Trustees and on the Utah Trial Lawyers Association Board of Governors and Executive Board. According to her firm biography, "Her one character flaw is that she is die-hard Chicago Cubs fan!"

Posted by
Teresa McNeill
on March 28, 2016
I don't know if this case has been settled or not. My issue with lazyboy isn't employment related, but consumer related. I've already been informed that a lawyer would not take my case. I'll have to try mine in small claims court or via the court of public opinion, but what has happened to me due to lazyboy's false Made in the USA claim injured me. If it helps your case against them, I can show you how unethical this company is.

Their furniture is toxic. I wouldn't recommend any child, elderly person or anyone with a compromised immune system sit on this couch. We purchased a sofa and loveseat from the Greensboro gallery on January 2, 2016. The entire time we were in the store, the salesclerk, a woman, was putting pressure on us to buy that day "while the New Year's Day sale was still on." We told her in plain English that we did not want to buy any furniture made in China. Over and over again she insisted that "all of Lazyboy's products are Made in the USA." Regretfully, we paid for a sofa/loveseat Rowan style in Peacock blue. It had to be "special ordered". The delivery guys dropped off the furniture on Feb 9. I wasn't at home to meet them. My husband said as soon as they unwrapped the plastic, he could smell a "strong" chemical odor, but he didn't mention it to the guys. By Feb 16th I was covered in a rash on both arms, both knees and both legs. It resembled chicken pox and the itching and pain was severe. I fought it for two weeks, popping Bendryl and bathing in Calamine lotion until the itching became unbearable and the rash kept spreading. I went to an Urgent Care center who suspected contact dermatitis and started asking about changes in my environment-new soap, new laundry detergent, being outdoors (too cold and snow everywhere), I mentioned that we had purchased new furniture, but I couldn't understand why I had the rash and my husband didn't. I started a prescription steroid cream, but the itching and rash were still spreading. I finally told my husband that I knew good and well I was allergic to something in that furniture. I was well one day-enter new Lazyboy furniture-and then I'm sick for 4 solid weeks. I went online and did a search for "Lazyboy furniture causes itching and rashes" and boy was I shocked. Lazyboy imports all their fabric from Asia, probably China. The salesclerk failed to mention that detail to us. Upholstery fabric from China is laced with a fungicide/biocide to prevent mold growth during shipping to the USA. This chemical and all imports that contain it were banned in Europe back in 2010. The USA and Lazyboy have known about this for the past 10 years, yet they refuse to provide the contents and origin of their upholstery to customers. Now it looks like we are stuck with poisonous furniture. They are sending a technician out to inspect the furniture. For what? You can't see chemicals and toxins with the naked eye. I told the Customer Do Not Care office in MI that they were full of it if they think we're paying for a tech visit. I've got pictures of the rash and notes from the Urgent Care doctor and my dermatologist I had to see. My derm told me to get rid of it now and never to touch it again. Lazyboy also charges a restocking fee to return furniture. In other word, even they decide they better refund our money, we won't get it all back. They won't get that either or I will report them to our State Attorney General's office and the TV station in Monroe MI where their corporate office is located. I'm going to dump this mess right back on Leo Brown's doorstep. If they think offering us a replacement is a remedy, they can think again. It will be another poison couch and I won't accept it unless and until they can provide with documentation attesting the fabric is NOT imported and it has not been factory treated with dimethyl fumarate. I agree with the other customer who wrote :Fool me once shame on you, fool me twice shame on me. I won't get backed into a corner on this deal after what their toxic sofa did to my skin. I've scars up my left arm from it and on the backs of both legs from scratching. Buyer beware. Lazyboy's promos and discounts are not worth the hazard to your health. I wouldn't let the family cat or dog sit on this furniture.

Posted by
Kimberly Miller
on December 8, 2014
I was recently terminated after only 7.5 days at a job. I had not even been trained adequately as the majority of the staff was missing due to the Thanksgiving holiday. There was never a point at which I was told I was not training quick enough or even a supervisor around to evaluate my knowledge with a proprietary software. Nor any sort of matrix except the possible computer training session that I had to do alone as my supervisors were not around. The software was not allowing me to navigate any answers and several times rebooted the system requiring me to start all over. There was no supervisor for me to go to with my problems.