To the Makers of Kugel Mesh: Cover My Medical Expenses

"I was reading some of your articles about Kugel Mesh and realized that the same thing happened to me," says Richard Keough. "I got my medical records and sure enough, the mesh used to repair my hernia from my first surgery was on the recall list."

In 2005, Keough had a hernia repaired with Kugel Mesh. He had an impacted bowel and became very sick; part of his bowel was removed and a large mesh was inserted. But he didn't get better. "I was only out of the hospital a few weeks when I got really sick with a high fever and nausea," says Keough. "I went back to the doctor and he had me admitted to hospital right away. I had a CAT Scan and it was determined that the mesh was causing an infection so I had to get it all taken out - another surgery." 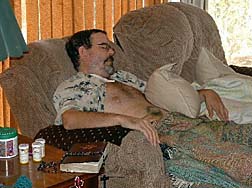 "I was in the hospital this time for two weeks recovering. I was drugged up so I didn't ask any questions about the Kugel Mesh - unfortunately. After that I had home care three times a week for two months with a 'sponge and vacuum' treatment to try and close the wound; it was the size of a softball.

Eventually I was able to return to work but I lost three months wages. But I hadn't quite recovered: my doctor explained that the area had no muscle tissue and I had developed another hernia. In January 2006 I had another surgery - with Kugel Mesh again! I had another open hole in my stomach about the size of a grapefruit. Two meshes were taken out the second time - I had a tunnel going from one hole to the other.

I didn't know at the time that it was the cause of my infection; no answers were ever given from my doctors - I thought that it was something wrong with me, getting this infection and another hernia. I was doing well until the end of March - I developed a fever that spiked to 104. My doctor thought I had strep throat and put me on antibiotics but in two days my stomach started to expand and burst open: nasty fluids and parts of the mesh came out. It was really ugly.


Now I was mad. I knew what was in store and I was so furious - I didn't have the time or means to deal with yet another surgery; I am the sole provider in my family - I have two kids living at home. The second time I got sick, my wife got fired from an 11-year job because she took time off to look after me. Now she was out of work and I was back in the hospital.

When I got this second hernia, I could never get a straight answer from my doctor or anyone to determine whether or not Kugel Mesh caused it, and these horrific infections. But it definitely caused the first one. I just have to get the medical records and find out if the second Kugel Mesh was on the recall list.

Now, I'm out of work, there's no money coming in and I have used up all my vacation time. My insurance pays 80/20 so I've had to fork out thousands of dollars in home care and bills. We went through all our savings, including my wife's 401K. I don't know where to turn anymore.

My wife saw an article on the Internet about the mesh - the recall. I was reading some of your articles and said to my wife, 'Wow - that happened to me!' I was able to get my medical records from the first hernia surgery and sure enough the mesh was on the recall list. I am currently waiting on the records from the second surgery.

This is what I want to tell the people responsible for Kugel Mesh: We all want to make a few bucks but if you knew, or there was a strong chance you would hurt someone, why put it on the market? Why put my family through this? It has ruined our lives.

I just want to get back to where I was - I'm not looking to make money from the makers of kugel mesh - I just want my expenses covered."