A woman from Michigan claims her late husband, who died of lung cancer, was felled from the aftereffects of asbestos exposure while on the job. To that end, plaintiff Phylis Rutledge filed an asbestosis lawsuit on behalf of the estate of Warren Rutledge against a host of defendants. 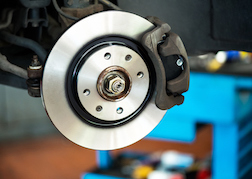 Asbestos is a known carcinogen whose lethal properties were suspected as far back as the early 1900s. However, that didn’t stop manufacturers from including asbestos in a host of products ranging from wallboard and ceiling tiles, to insulation and brake linings during the industrial revolution. A confusing aspect of asbestosis disease and other diseases related to asbestos exposure, is that victims exposed to asbestos fibers or dust do not immediately become ill – thus employers assumed their workers were fine, and seeing no immediate aftereffects took few precautions, if any, to protect their workers.

Asbestosis disease, asbestos cancer and mesothelioma can emerge as long as three decades following exposure. By then, it is usually too late. Asbestosis disease and related afflictions are widely considered a death sentence. In rare cases, the spouses and other family members of asbestos workers have died through second-hand exposure to asbestos.

Warren Rutledge, the victim in Michigan, was employed at various companies from 1963 through 2011. During his career, it is alleged that Rutledge was exposed to asbestos fibers and inhaled same without protection while coming into contact with various products manufactured, sold, distributed or installed by defendants including, but not limited to Arvinmeritor Inc., A.W. Chesterton Co., CBS Corp., Certain-Teed Corp., and Colfax Corp.

According to the Madison County Record (08/03/17) Rutledge developed asbestosis lung cancer and died October 18 of last year. His widow, Phylis, is bringing the asbestosis lawsuit on behalf of the estate of her late husband. She is alleging negligence.

Amongst her allegations, the plaintiff holds that the defendants were negligent because they included asbestos in their products when adequate substitutes were available. Rutledge also asserts that defendants failed to provide adequate warnings and instructions concerning the dangers of working with, or around products containing asbestos fibers.

While asbestos is now widely-known as a carcinogen, it is still being manufactured and used in such products as automotive and industrial brakes, as well as a host of other products in third-world countries.

A larger threat which looms in present-day America is renovations of older buildings that contain asbestos.

The original school of thought was that asbestos must be removed at all costs. More recently, experts have come to the view that asbestos can be left behind so long as it remains in an area that is, or is expected to be undisturbed. For major renovations, however the removal of asbestos is undertaken through a carefully-choreographed process that protects workers from inhaling, or ingesting asbestos fibers or dust.

More ASBESTOSIS News
Less-informed or untrustworthy renovators have been known to skirt the new rules. Other renovators have been found to adequately protect their workers from airborne asbestos fibers, but do little to contain dust and fibers within the renovation area, putting innocent passersby at risk.

In the Rutledge asbestosis lawsuit, the plaintiff wants a trial by jury and seeks judgment against defendants of more than $50,000 and any further relief as the court may deem appropriate. The $50,000 referenced is a minimum benchmark for filing purposes.

Posted by
Concerned
on September 11, 2017
My father died of - Asbestos in lungs. Lived in New York, In Navy, worked in construction for 32 years. His death was in 1985 - asbestos of lungs. No lawsuit because the statue of limitation. WHY IS THAT??