Guy Koski's son was prescribed Actiq lollipop for severe pain relating to a back injury. Eventually the pain subsided but his addiction to the powerful opiate was overwhelming - after taking Actiq for almost two years, Scott committed suicide.

"In 2000 Scott had a herniated disc; he installed satellite dishes evenings and weekends to help put himself through college and hurt himself on the job," said Koski. "He was 22 years old and in really good shape but this injury set him back - although it wasn't devastating, his back ached constantly." 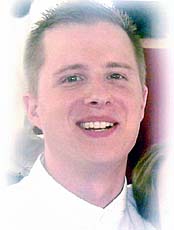 Scott had difficulty sleeping at night with the pain and he couldn't go back to work. He was living alone and supporting himself so when his doctor recommended an epidural injection to relieve the pain, Scott agreed. But the procedure didn't go well.

"He came home heavily medicated but in a lot more pain," Koski recalled. "It was like he had a constant charley horse knot in his back but he couldn't stretch it out." Scott went back to the doctor and was prescribed more pain killers and was told that nothing could be done except "wait it out." Koski took Scott to the physician who performed the procedure. All that he said to the Koski's was that the procedure didn't work and they recommended not doing another one.

"We must have seen a dozen different doctors - back and pain specialists. One highly qualified specialist in the Sacramento area examined the MRIs and concurred - nothing could be done. 'If it was up to me, I would never have back surgery, not enough is known about it,' said the specialist."

By now Scott had changed primary care physicians. He was prescribed Oxycontin - a strong narcotic - and had to sign a contract saying he would take it as prescribed. But Scott was in so much pain that he ran out of meds and asked the doctor for a refill but she wouldn't renew the prescription - he had taken more than prescribed and broke the contract.

"My son never did drugs," said Koski. "He used to work out, he was very conscious of his health - he was a strong kid. But the pain was so bad that he couldn't survive on two pills a day. I took him to UC Davis Medical Center but the doctor refused to give him a narcotic. We had a 100 mile drive there and back and he was so despondent. I drove him home but he wouldn't let me come in. 'No father should have to witness this,' he said to me."

Scott eventually found another doctor who prescribed him Oxycontin but he would spend up to 20 hours a day in bed, day in, day out. From 2000-2003 he lived with his girlfriend but times were financially tough so Scott moved back home with his dad, in January 2004.

"We were vacationing in Nevada when we found out that our insurance company wouldn't cover his prescription anymore," said Koski. It cost about $1,000 per month which we paid for and the insurance company reimbursed us. So his doctor prescribed Actiq, even though it was almost twice the cost. I think Oxycontin was getting some bad press at the time... Scott went through about six Actiq lollipops a day - he always had a sucker in his mouth. Talk about looks being deceptive - I had no idea this drug was so powerful.

He had all kinds of back pains. Because of the original herniated disc, Scott walked like an 80-year-old man. But the worse pain was a constant cramp in his shoulder blade, from the medical mistake. Originally Actiq was prescribed for his shoulder, but I found out from his girlfriend that the cramp had been gone for more than a year - he was addicted.

Scott was strong-willed and intelligent and always said the drug wouldn't get to him. We had a lot of plans - he was going to get into computer work. But it got to be too much. After Scott's death, my therapist told me that nobody should have been on this drug without constant supervision. I think it caused his deep depression. It altered his thinking so much that he took his own life.

Can you imagine not seeing a future because you are so zonked out on drugs? He couldn't face life. I was grateful that Actiq was killing the pain but somebody should have been checking on his mental state.

If somebody is taking Actiq, they should be supervised and checked for depression. I didn't know how mentally ill Scott was, but looking back, he had all the signs. Actiq wasn't improving his situation - instead, this drug made him lose the will to live. The pain was gone physically; although it took four years it would have been manageable if not for Actiq. The makers of this drug should warn doctors that they should monitor people and not prescribe it so readily.

"Thank you very much for taking the time to listen to Scott's story, there were so many that didn't."

If you or a loved one has suffered life threatening side effects from the Actiq Lollipop painkiller, please contact an [Actiq Lollipop Lawyer] who will evaluate your claim at no charge or obligation.
Request Legal Help Now

Posted by
Daniel Paxson6
on April 28, 2013
My condolences to you and your family. I have traveled a similar path. I go through more than most single moms as a single dad to maintain a proper life for my three gifts from above. I know the difficulties involved and the humiliation of being seen as an addict, regardless if a doctor put you in that situation when you weren't educated on the consequences. It will destroy an honorable young man's self esteem and should be held accountable.

I wish you and your family the best.