Despite Tough Times You Can Still Sue Automakers

Bisnar Chase is a small but mighty little law firm that specializes in automotive product liability cases. It has laid to claim to millions of dollars in lawsuits from its southern California location against Ford, Chrysler and GM, as well as Japanese automakers like Toyota and Honda on behalf of hundreds of clients across the US "who got the short end of the stick", as attorney Brian Chase says. 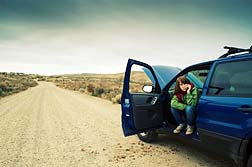 But with the auto industry on the skids can consumers still sue and expect to see compensation?

Chase pauses a moment and then gives his thoughtful reply. "Well", he says, "that depends." He obviously knows what the automakers' responsibilities are when it comes to product liability law, but he also has a strong working knowledge of their financial situations. "Chrysler and GM are the only ones in a position to fail," he says.

"We tend to look at the Chrysler and GM a little differently these days," Chase explains. "Ford is in some trouble but they haven't taken bailout money. However, when it comes to the others, like the Japanese automakers for example, it hasn't affected the way we look at them at all. Even though they are not doing well they are not in bad financial shape."

GM Faces $350 Million Suit
Bisnar Chase recently filed a $350 million class action against General Motors over a faulty emergency brake system in trucks and SUVs GM manufactured, advertised and sold between 1999 and 2005. GM recalled the vehicles, but only the ones with manual transmissions. "The problem is with the retention clip--the net result was that you would be driving around and your parking brake would be on a little bit but you wouldn't know it and eventually it would wear out."

The case has been stayed because of a competing lawsuit in Arkansas. Bisnar Chase is appealing the judge's ruling but regardless of the outcome, the problem for litigants is the same.

Creative Ways to Compensate
"I don't see General Motors in a financial position to settle these kinds of cases," says Chase. "GM is in bad shape, but there are different ways these cases can be resolved other than just dollars and cents."

More Defective Product News
In cases like this, people who had to pay for the brake system repair need to be reimbursed according to Chase. "Or GM can say you can take it to the dealer and we will fix it," he adds. "It will still cost GM money but it is a lot cheaper. There are creative ways to get people compensated and their car repaired rather than asking a jury to give you a verdict for $300 or $400 million dollars."

Corporations are not Evil
You can tell from Chase's thinking on the GM suit that he loves to find solutions to problems. "It is very rewarding when you dig into one of these cases--and I am not one of those guys that think all corporations are evil," he says. "But when you dig into one of these cases where companies are putting profit over people, it feels good to help consumers."

Bisnar Chase is a national automobile defect law firm that represents people who have been seriously injured due to an auto defect. They have won numerous cases against Ford, General Motors, Chrysler and various Japanese automakers.

Posted by
Linda E Guyette
on August 31, 2011
Tired of powerful co's ripping off consumers. I will be contacting Att. B. Chase, regarding Hyundai. I thought they were a reputable co. but I found out differently.